A Glimpse At Morocco

I’d never visited the north of Africa. Turkey’s maybe the closest I’ve come to a country like Morocco, and I didn’t have much fun there.

But of course, things are different on the mother continent.

After a quick two week whiz around Morocco, I don’t really have too much to tell you – it was two days here, three days there, and before I knew it I was back on a boat to Spain. But I can tell you – I like it! Here’s a few scattered thoughts from my short time in the country.

Every major city in the world has a Moroccan restaurant (or fifty). Gotta be a reason for it.

The food in Morocco is hearty. Slow cooked meat, stews, soup, couscous, bread. I like my food cheap, filling and simple – no turning my carrots into flowers nonsense. The tanjia above is just meat (all kinds) slow cooked with spices in a big clay pot. It’s perfect.

The tagine is similar, but cooked in a shallower dish and usually with vegetables. You can get them with chicken, beef, lamb, maybe even fish? You’ll find them for just a few dollars in most local eateries, and they’re healthy and filling which is the perfect combo for us budget travellers.

You want the good shit you gotta go to the source. #couscous #Morocco

They have a hearty harira soup, the famed couscous, shish kebabs, there’s even camel on the menu. Out near the coast, I ate one of the best fresh lobsters I’ve had in my life and it didn’t cost a fortune. The food isn’t Southeast Asia cheap, but it’s affordable and delicious. I ate well in Morocco.

Tip: Stay out of the tourist restaurants. The price difference is ridiculous and the food is more or less the same (or worse!). You will just be paying for decor and nice tablecloths. Look for places where locals are eating and drinking. A tagine will only cost you 35-45 dirham there, versus 100+ in the more swanky joints. You can also buy a lot of fresh fruit and veges in the markets for just a few dollars. You can eat very well on a budget here!

The tourist strongholds of Marrakesh and the Sahara are great, but there’s a lot more to Morocco than that. You can head up into the mountains, out to the beaches, Casablanca, Fez, the blue city of Chefchaouen, the movie city of Ouarzazate, all the medinas and kasbahs and desert towns – it’s a pretty diverse country. In the space of a day I went from freezing my nipples off on top of the mountains to sweating like mad in the bustling city. I didn’t expect there would be so much to see there, and that the cities would be as developed as they are. It’ll surprise you!

Tip: It’s a good idea to take tours here (I mean day tours, not big tour bus tours) – they aren’t that expensive, and you shouldn’t need to pre-book online. I’m certain you’ll get a better price on the ground. I doubt you’ll need to worry about things booking out – if you’re willing to pay for a tour, someone will be willing to take you. Get a recommendation from your riad (guesthouse), or if you’re game you can bargain with the many operators around the city.

If you’re after a good rundown of things to do in the country, fellow blogger Andrew put together a great list during his Morocco road trip.

A lot of history

Like most other dummies who visit Morocco, I thought it was populated by Arabs. Several people in Morocco were quick to point out they were not Arab, and that Morocco is not an Arab country. Our tour guide told us the Arabs came to introduce Islam (successfully), and introduced the Arabic language in the process (I don’t know the whole story, sorry). But the indigenous people of Morocco and North Africa are actually the Berbers. I suppose the Berbers had a kinder fate than most indigenous peoples, as the majority of the population is still Berber today. As you venture out of the cities, you’ll find many purely Berber small towns and cities where Berber is spoken rather than Arabic.

I noticed many of them are also very outspoken about their history books. In school they are only taught history that dates after the French arrived, despite there being a long Berber history to learn about, and a colourful Moroccan past as a bridge between Europe and Africa. I instantly related to this, because in New Zealand it is exactly the same; we are only taught history from the date the English arrived; and any Maori history before that is never talked about. At school I was never taught about the Maori kings, but I was taught a lot about the English ones and how many wives they had. Parallels like this always fascinate me, because it shows how deeply history, no matter how long ago, still affects us today all over the world. If I do get back to Morocco, exploring more of this history would be the main reason that gets me there.

Tip: Make an effort to get out of the cities and into these smaller Berber towns. I didn’t get much time to explore them but I’m sure there are many great stories to be found there. Just from a quick walk-around I could tell they felt very different. You’ll pass through a lot of them anyway if you’re heading towards the Sahara.

I was trying to tip toe on rocks over a river, and of course I slipped, and my shoes got soaked. Then we stopped for lunch, and I asked our driver if I could leave my shoes on top of the car to dry. Since the car was parked by the road, I had to ask:

“Will anyone take them?”

And he looked at me like I was birdbrained.

“Of course no one will take them.”

So we went and had lunch. And no one took them.

In Fez, we were warned to be a little more cautious at night, but the daytime was as safe as any city I’ve been to.

Marrakesh was even safer. In fact, we were told the king had made it a priority to keep visitors safe, and any crime towards tourists results in a few years in prison. Even at 2 in the morning, you could walk freely through the city and police were everywhere. I’d be very surprised if any traveller with elementary-level common sense has problems in Marrakesh – it’s probably one of the safest major cities I’ve ever been to.

Throughout the country (especially more touristy places) you’ll run into a number of petty scammers and street hustlers, but honestly it’s pretty tame by Africa standards.

Fellow blogger Kate even road tripped herself all the way from Marrakesh to Fez!

Even though the Sahara is swamped every year with tourists doing the obligatory camel tour into the desert, it’s still pretty cool.

It’s also cool to do a tour of more of the desert – people actually live there, there are villages and hotels and families out there. As you drive through you’ll see their intricate water systems, people riding quad bikes, maybe a little village built around an oasis. It’s pretty interesting.

The only thing about the desert is it’s difficult to indie travel it – the towns and villages would be possible, but heading out any deeper would not. You’ll need to take a tour. The good news is that won’t be hard to find – most people come to Morocco for the Sahara, so whatever kind of tour you want should be available somewhere.

Tip: Luckily I was there in early June, which is before the tourism onslaught. Our camel whisperers told us that come August, there’s around forty people doing the camp each night (we only had seven). Keep that in mind if you plan on going.

The water systems are pretty intricate, and it’s all communal. They dig deep and get these wells of water, then distribute it with these aqueduct like things in the sand. Pretty cool. And it’s not grab grab grab. Everyone shares. Imagine that?

Children of the desert. They must be tough.

It’s warm in the desert. And in the cities. It’s quite a dry heat, so more bearable than the likes of Southeast Asia or the tropics, but still pretty heavy. November to February should be a lot cooler; otherwise prepare to get your sweat on.

Tip: It’s getting more liberal, especially in Marrakesh, but even in the blistering heat there will be women walking around fully wrapped from head to toe. I would suggest being respectful as possible and covering up when you can, especially the ladies. I did wear singlets a couple of times in Marrakesh, but other than that I tried to at least wear a t-shirt.

You’ll get sold a lot of stuff

Then you’ll get sold the Argan oil. The Argan tree is endemic to the south of Morocco, and you’ll hear the same story about this tree many times (they tried to plant it in Spain, it didn’t grow, they tried to plant it in the lab, it wouldn’t grow, in the north of Morocco, it didn’t grow. It only grows in a special place in Morocco). Then you’ll go into the store and see all the ladies sitting there breaking open the Argan fruit and grinding the nuts into oil. Then they’ll tell you Argan oil cures everything and get offered a few bottles for sale.

Then you’ll get sold some hand-woven silk stuff, maybe some dates, a Moroccan rug, some spices, a photo with a snake around your neck. There is a lot of stuff that is uniquely Moroccan, so naturally there’s a big money grab selling this stuff to tourists. Take your time if you want to buy it. There’s no rush. You’re going to see it again the next day, I promise.

Tip: Like anywhere in Africa, you have to haggle! Our riad owner told us we shouldn’t pay more than 60-100 dirham (5-9 Euro) for a good leather belt. But in the shops we were getting quoted 20-40 Euro. I don’t really buy things when I travel so I didn’t get in on it, but I would suggest haggling super hard, China/India style.

It’s actually a great place for budget travellers. Even in the cities, you can get a decent tagine for 35-45 dirham ($3.50-4.50), a taxi for 15 dirham ($1.50) and a dorm bed for about 70 dirham ($7USD). The country gets a lot of visitors so the tourist infrastructure is good, especially in Marrakesh. Even in the smaller cities, there are a lot of independent riads (guesthouses) that give you good accommodation options. This actually makes it cheaper than a lot of sub-Saharan Africa, even though it’s more developed. If you’re backpacking, 200-250 dirham ($20-$25) per day should be more than doable, excluding any tours you want to take.

If you’ve never been to Africa, it might be a good place to get your first taste of the continent! 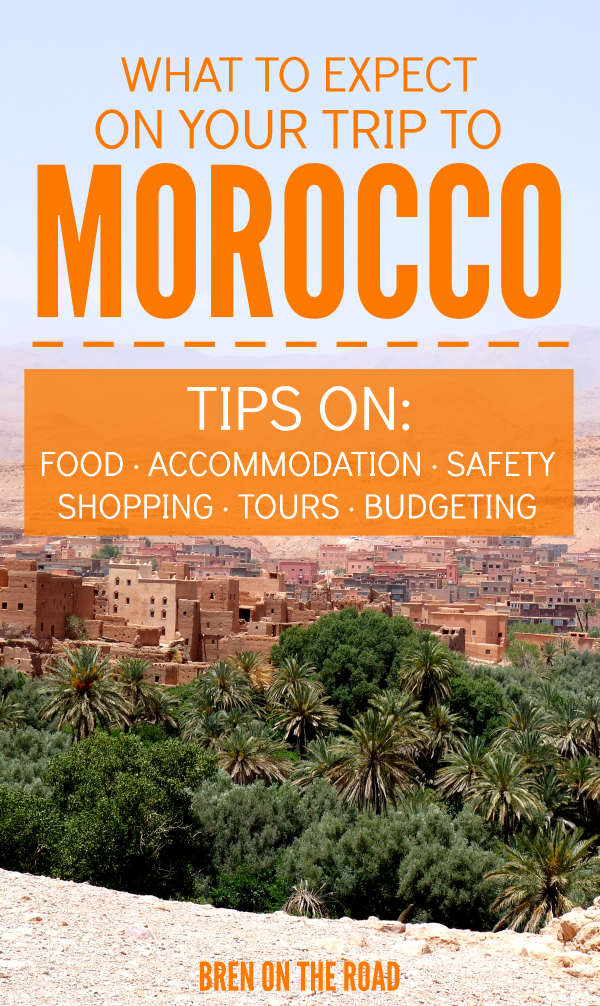