Under Stars In The Sahara

This camel has big mouth.

Seriously, you could fit a basketball inside.

I jam my camera in his face and snap a photo. I’m sure he doesn’t mind. Or maybe he does, but after a million stupid gringos doing the same thing, he’s probably over it.

Our Berber guides tell us, one by one, to jump on our camel’s backs. They’re kneeling in the sand, makeshift blanket saddles strewn across their backs. Like kids on a school trip, we climb on, a little too excited.

As I steady myself, the guide gives the camel a little nudge and a pssst, and it climbs up onto its feet. It feels higher than I expected.

We start to ride. I notice the number tag punched into my camel’s ear. It’s been bolted in, with a nail the size of a cigarette. I feel sorry for him. I feel doubly sorry that he has to cart me out here on such a nice afternoon when he could be relaxing with his bros taking sand baths and comparing the calluses on their knees. Then I see the reigns wrapped around his neck. I trace them with my eyes, up around his head and through his nose. The rope is actually threaded through his nostril, so that he has no choice but to follow the chain. And the rope is then tied to ass of the camel in front. I feel triply sorry for him. Not only is he forced to stare at that camel ass in front his entire life; he’s chained to it. Even if he wants to look away when it poops, he can’t. And they poop a lot. If that’s not bad enough, his honourable death will be getting served as a camel burger in a tourist cafe as soon as his legs give out.

Next time, I think I’ll come out by quad bike.

The ride out is about an hour. Riding uphill is easy, but riding downhill gives the core a bit of a workout. I see one girl up front struggling, holding on for dear life. I feel bad for laughing. She just looks so funny though.

The guide up front leads the camel train on foot. He walks in bare feet, standing on camel pee and poop with every third step. He doesn’t care. He embraces it. He’s a man of the desert.

Of course, there are no roads out here. It’s just orange sand in every direction. But these guys know the way somehow.

The sun is almost setting when we get to the camp. It’s a small site, the size of half a tennis court. The rooms are tented with heavy woollen blankets to withstand the wind, but they also keep the heat in. I go into my tent for thirty seconds, then come straight back out.

While the guides cook dinner we go wandering. It’s vast, and barren. The desert is big and empty – who knew? We climb to the top of the closest dune to catch the sunset and take selfies. Out here, all you can see is orange. A big sea of hilly, wavy, endless orange. I just sit and stare at it, I don’t even know what to think. What is this place? Why is it here? Mind boggling, and scary too. We’ve only come an hour from civilisation, but if everyone disappeared now I’d have no idea how to get back. I’d be dead in three days.

We climb back down to camp as it gets dark. The camp is set up like a courtyard, with tents in a square and a communal eating and sitting area in the middle. I lay on one of the mats and stare at the sky. Stars are slowly coming out, but I can barely see them among the camp lights.

Dinner is soup and tagine. It’s like a stew, with meat and vegetables, and we eat by candle light. It’s all very nice. But I want to go and feed my camel.

One by one, people drop off. A couple go to bed. A couple more. Before long, I’m the only one left and they turn out the lights.

It’s completely dark. The weather has cooled, and the wind is starting to pinch. But it’s okay. I lie on the mat, staring up at the sky. It’s so dark, and there are so many stars.

I put in my earphones and put my phone on shuffle. Now it’s like a soundtrack. If this were a movie, this would be the scene where the main character has his moment. Staring at the open sky in the middle of nowhere and it all becomes clear. He knows what he’s supposed to do.

Is that what’s going to happen? Maybe. I feel energy. In fact, I have a lot of moments like this. Always when I’m alone, silent, somewhere special. It makes me think about things.

I feel a sudden surge of appreciation. Gratitude completely engulfs me. I thank the universe for letting me be here. I thank it for keeping my family safe and healthy and happy. I thank it for the journey and this crazy moment happening right now. Stars. The middle of the Sahara desert. Silence. I take a deep breath, or two or three. I don’t know what I did to be so blessed. Nothing, probably. Just one of the lucky ones. Thank you for giving me a good life.

I get lost in the stars. You can’t count them, it’s impossible. They’re never ending. They’re so bright, brighter than I’m used to in New Zealand. Counting Stars by One Republic comes on. Poetic, almost. My body is filled with fire. I don’t know why.

After ten minutes, whooosh. Shooting star. Can’t even remember what that means. Make a wish? Buy a lotto ticket? I don’t do anything. I just say thank you for the shooting star.

Everyone loves looking at stars. Why? They don’t do anything cool, they don’t even move. They just twinkle. But we love it. Maybe it’s what they represent – the unknown. We’ll never touch or smell or feel them. They just tell us how insignificant we are. Look at all these galaxies. Aliens? Are there aliens? There must be. Maybe they’re on that star over there. Or that one. I wonder if they’ll arrive soon and kill us all. What are these stars? Are they planets? Asteroids, maybe? Is one of these meteors going to come blow us up soon? Probably. And none of the aliens will care. Probably a meteor killed a whole bunch of aliens already today, and we didn’t care. Damn I’m getting kinda cold.

I don’t know how long has gone by. Maybe an hour. Maybe two. I grab my phone to check, then quickly change my mind and put it down. Because what’s the point? The time would tell me nothing. Time is irrelevant right now.

I think about the journey that brought me here. All the small conversations, and the big ones. All the small friendships, and the big ones. It’s all led to here. But why? Where does it end? What’s it all for? One day you’ll be gone, and it’ll be like it never happened. You gotta pay it forward – leave something behind, make it count for something. It was so clear for a moment. You gotta write your book, Brendan. Write the damn book.

The stars do it to you. They’re an incubator for this type of melodramatic navel gazing. It’s these solitary moments that send us to look deep inside ourselves. We become conscious of things we secretly knew all along. Even if just for a moment.

The cold wakes me up. I look at my phone – 3am. Not yet morning. I get up to pee. As soon as I walk outside the camp, I get the spooks. There is a port-a-loo like toilet about 25 metres away, but I just walk halfway and pee in the sand, like the camels. I don’t want to get lost. This is the middle of the Sahara in the middle of the night. The sand looks grey now, and you can hear it shuffle with the wind. It’s lit by moonlight, but cold and ashen, as far as the eye sees. I’ve never seen a place like this before. It looks so mysterious. It even feels mysterious. Like I could see ghosts and shadow warriors and I wouldn’t even be surprised. I’d just think, yep, I thought I might see some shit like that out here. I hurry back to camp.

I tell myself I’ll stargaze just a bit longer. Just until the next shooting star. I lie back down on the mat. My mind is empty now. I just stare blankly, watching the whole sky twinkle before me, waiting for it. I wonder if it’ll ever come. But it doesn’t take long. After just a few minutes, whoooosh.

I go to bed happy.

I’m the last to wake up. Everyone’s already taken their photos of the sunrise and is now chilling on the dunes or packing up to leave. I get dressed and go visit my camel.

Hey bro, hope you slept well. Sorry but you gotta take me back, I don’t know the way.

I stroke his head and he flinches.

I wouldn’t want to be touched on the head by me either.

The ride back to civilisation is a sobering wake-up. It’s not every day you ride a camel in the desert before breakfast. The girl in front is still on the brink of falling off, and I still find it funny. But she makes it all the way.

The ride feels shorter today. As we arrive back, the guide gives my camel a nudge and a pssst, and he drops to his knees in a clunky one-two. I hop off and pat him on the back, and promise to never eat a camel burger ever again. I take one last photo, thank him, and say goodbye.

Often, we go to a place and don’t learn the things we expect to learn, or feel the things we expect to feel. But the road is fickle. There is no rule book out here. You take whatever it gives you, and embrace the journey as it happens. One day you’ll look back and think, yeah, I remember that conversation, or I remember thinking of that idea, maybe in the ocean, some town by the lake, or under stars in the Sahara. Those moments change us, whether we want them to or not. So collect them, and remember them. Because that collection of moments is called life. Happening right before your eyes.

To the many moments and memories, 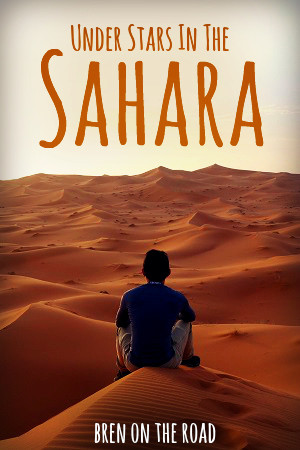