The Real Reason I Quit My Job To Travel The World

Back when I was a young teenager, I remember sitting in the car one morning with my Mum on the way to school. The night before I had just watched an episode of South Park, where the guys were sent a starving child from Ethiopia and then took him to a buffet, but kept stealing his food as he was about to eat it. While obviously just bad comedy, I remember being extremely angry at it, and thinking how incredible it would be to really take one of those starving children to a buffet and let them live in our shoes for a day.

And so I blurted out to Mum, “One day, I’m going to get really rich and then go and build a village in Africa.”

I don’t remember exactly what she said in reply, but it was probably along the lines of, “If you study really hard and come first in class, you can build as many villages as you want.”

You might say, even at that young age, I was already dreaming of adventuring in faraway places.

Of course those intentions were a little starry-eyed, and today I’d probably say building a village in Africa would just be a wasteful and ego-driven way to blow a bunch of money. But the point of the story has nothing to do with Africa, or villages; it’s simply to say that from my earliest years, I had never once dreamed or aspired to become an accountant.

Nonetheless, around ten years later there I was, fresh out of university and sitting at a desk in an accounting firm. I had never planned it that way, and still to this day can’t really figure out how it happened; I just ended up taking accounting in high school, studying it at university, applying for a few jobs, and then, like clockwork, I was locked into a three year accounting contract. Funny how life can flash before your eyes like that, even when you’re not dying.

And so I continued to drift along, following the crowd like I’d always done. Everyone signed that form, so I signed it too. Everyone joined that institute, so I joined it too. I straightened up my tie and cleaned my shoes. I paid my fees. I played the game.

It was long, painful. Every morning I would wake up and curse relentlessly, starting every day as bitter as they come. But as much as I wanted to, I didn’t give up. My fellow comrades and I trucked along, just like we were supposed to.

“Just one more year,” they said.

Three years passed slowly but I’d played all my cards right. I studied hard. I passed all the exams. My grades came back and they were “great”. It was seven years of study and tens of thousands of dollars in fees, but my efforts had finally culminated in two words – Chartered Accountant.

Yet as I watched everyone else celebrate with such glee, I didn’t see many reasons to be happy. I hadn’t really enjoyed my time as an accountant, so I didn’t find a whole lifetime of it as something to be very excited about. I’d been told for years that accounting was an interesting and important career, yet nothing about it seemed very important or interesting to me.

Before long, many of my colleagues had moved to London or Sydney, where they picked up six-figure salaries with relative ease. The ones that stayed in New Zealand landed jobs as managers and advisors in some of the country’s biggest companies. It wasn’t uncommon for them to be earning over $3,000 a week, and usually for doing a lot less work than we were used to. Here was the payday we had all been working towards, and finally it was sitting there in front of us, waiting to be taken.

For several months I pondered the idea. London? New York? A fat paycheck and a sexy looking business card? It was extremely tempting.

But it was different this time. Money didn’t entice me anymore like it did when I was 21. I was at a point where I hated my life and I hated myself, and no amount of money was going to fix that.

Instead, it was a deep-seated unhappiness, a result of spending my whole life working so hard for things I had never wanted in the first place. People used to ask me what I did, and when I had to answer “I’m an accountant”, I felt ashamed of myself. And not because there is any shame in being an accountant, or because accountants are to be looked down upon; in fact, it is considered one of the more prestigious careers in my country. It was merely because an accountant was never what I wanted to be, and that was never the life I had envisioned for myself. Each day I would stare out the window and dream of living a different life; studying Spanish in Spain, exploring my ancestry in China, volunteering in rural Africa, backpacking through South America and Southeast Asia. To say I was an accountant only upset me, because it told me that I did not have the resolve, and was too afraid, to chase after the life that I truly wanted. I was a dreamer; someone who talks big and walks small. I was that guy. And I knew if that was always how I saw myself, there was no chance of me ever being happy.

It was a strange feeling at first. I felt so…free. I thought back to when I first started working, in particular to a distinct memory I had of buying some gear online for my computer. At that time, I was barely two weeks into the job, and I had wanted to go pick my stuff up from the shop warehouse. However, I couldn’t go during the week because of work, as the shop closed at 6pm, nor could I go on the weekend because the shop was only open on Saturday morning and I had sport. The sudden feeling of paralysis hit me like a brick. I felt so suffocated; shocked at the realisation that someone now had so much control over my time that I couldn’t even pick up my own shopping.

And now, I had too much time. Where should I go? What should I do? Options were literally endless, and all that seemed to do was spurn hundreds of ideas that collided with each other. Overwhelmed, I spent a month vegetating at home, but eventually managed to pull my plans together and set out on the journey I had been dreaming of.

Fast forward three years and all those Monday morning dreams I had have come true: I’ve studied Spanish in Spain, lived for a year in China, taught for six months in Africa, backpacked South America and Southeast Asia and so much more. All the things I had so longingly lusted for in that office cubicle, each of which had seemed like highly improbable fantasies at the time, became realities, and each of them were just as fascinating and fulfilling as I had imagined them to be. It seems that dreams, no matter how extravagant, do come true, and sometimes they are much, much closer than you think.

These days, my old life is a distant memory. Sometimes I actually look back and find it hard to believe those years ever really happened at all. They just replay in my mind like a movie I once watched, or a dream from years before. Three years in the office is just one big blur, but three years on the road has blessed me with enough memories to fill several lifetimes. I can finally say with honesty: if I died today, I would have very few regrets at all.

People ask me all the time about my future plans, and to be honest, I don’t have too many. In terms of money, I don’t need a lot; between life as a blogger, some side projects, my freelance gigs, my savings, and the investments I made during my working years, I make enough to live quite comfortably in many different countries. I live a much simpler life than I did before, and spend far less than I used to; at my old job I used to pay $13 a day just to park my car. That amount alone is enough to get by each day in many of my favourite cities around the world.

And then, people often ask me if I ever regret my decision. Do I miss the office life, the routine, the putting on my suit and tie each morning? And the answer is, shockling, yes. Sometimes I do. Travel is not always the glamorous lifestyle it appears to be, and sometimes, you miss the familiarity of a routine and a community. But not once have I regretted setting out to fulfill my travel dreams. Exploring the world has been a truly priceless experience, completely my own, and totally irreplaceable.

Try to remember that life is to be enjoyed, and we usually make a habit of taking it a little too seriously. As long as you have food to eat, clothes on your back, and a roof over your head, the only thing missing from your happiness is fulfillment. Forget the shiny life you are sold on television. What do you enjoy? What makes you happy? Start chasing that today, because waiting is a fool’s game. Sooner or later, the day will come where you don’t wake up, and none of us know when that might happen. It may be today, or 50 years from now, but either way your tomorrows are numbered.

How are you going to spend them? 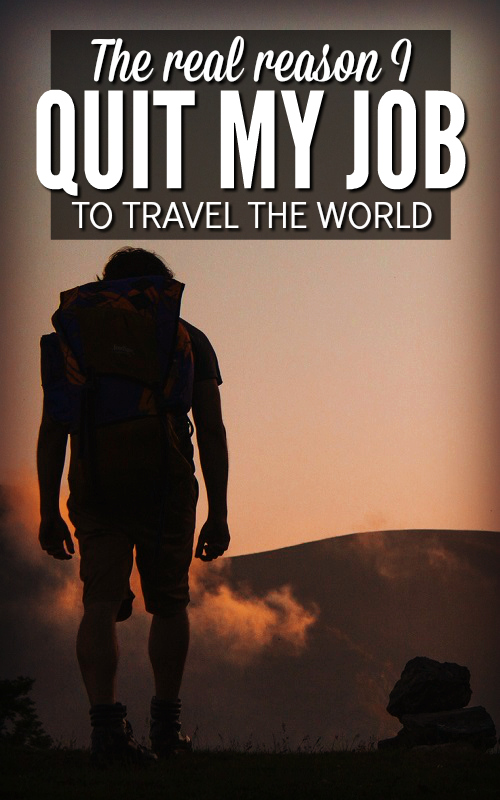