How To Make Friends While Travelling Alone

It’s one of the big fears of every solo traveller – how will I meet people?

Don’t worry. I also have this fear every single time I travel. Will it ever go away? Probably not. But I never let it stop me from getting on the plane. After all, that’s part of the beauty of travel – you never really know what’s going to happen. Maybe you’ll make a new best friend. Maybe you’ll meet absolutely nobody. Maybe you’ll fall in love. You never know until you go…

Of course, there’s a few specific things you can do that will make meeting people a little bit easier. Here’s a list of things that I’ve learned to do over the years:

There are many good reasons to stay in a hostel dorm, however networking with other travellers is one of the big ones. Some dorm rooms have up to 20 beds – how could you possibly not meet someone in a room that big? If you’re scared to say hi to them, just ask them a stupid question.

“Hey, do you know if this place does laundry?”

“Hey, do you know if there’s a post office near here?”

From there, it’ll just be natural to ask what their name is, where they’re from, how long they’ve been travelling, what’s good to do in the city. Before you know it, you’ll be sitting down over a beer and laughing about your hangover the next morning.

While some people are not crazy about the idea of sleeping on a stranger’s couch, most cities will have a ‘Couchsurfing drinks’ which happens once a week or once a month and this is a great place to meet locals and travellers alike. I’ve surfed couches and been to several meetups all over the world – Africa, South America, Asia, and it’s always been a great experience. I’m still in touch with many of those people today.

Best approach: Log on to Couchsurfing and find out when the weekly meetup is – then float the idea with your new hostel dorm mates and head down there together. Don’t be scared – the locals at the meetup are there for the sole reason of meeting people like you – travellers!

Alternatively, you could just post on the wall of the city you’re in that you’re a traveller in town and you’re looking for people to hang out with. Also, do some research first and be specific! I don’t think many people will respond to you if you write “I’m in Bangkok and have no one to hang out with. Message me.” That sounds kinda boring, right?

While in Bangkok I Googled some great street food places and posted up “I’m heading out to try Bangkok street food. Soi 38 is supposed to be one of the best places in town so I’m heading there tomorrow night to check it out! If you wanna join me just let me know.”

I ended up heading out there with a couple of other guys and we had an absolute feast, as well as a few fun nights out in Bangkok after that.

If you’re new to Couchsurfing, check out my beginner’s guide Couchsurfing 101: Everything You Need to Know.

When I was in Spain, I took Spanish classes. When I was in China, I took Chinese classes. When I was in Peru, I took Spanish classes again. When I was in the Philippines, I took MMA classes. In Ecuador, salsa. In France, French. In New Zealand, surfing. Basically, everywhere I go I try to come away with a new skill of some sort. The plus side of doing things like this is that you will meet a lot of people! It’s very rare that you will be in a class by yourself – you will always have classmates, and naturally you will get along because you obviously share similar interests. Some of the best travel friends I’ve ever made were people I met during activities like this.

Ask the locals questions, even when you don’t have any

Just make a habit of trying to be social. When you’re sitting in a cafe eating breakfast, talk to the waitress. Ask her questions, what there is to do in the city, what her favourite food is. More often than not, they’ll be just as interested to talk to you as you are to them. When you’re on the bus, chat to the person next to you, ask where he’s going, what he does for a living. Ask him to suggest something in the city for you to do. Probably 99% of the locals I’ve met are more than willing to have a conversation and make you feel welcome in their city. When I was in Cusco, I remember having a quick chit chat to the security guard of my Spanish school, asking him about the nightlife and the different parts of the city. That weekend he invited me out with his friends and introduced me to a whole bunch of people. If you make an effort to interact with as many local people as possible you’ll definitely make some local friends that will add a whole new dimension to your trip.

As foreigners, we generally only get to see one side of the city, and that’s because it’s typical for hotels and hostels to be clustered in the safer, more developed areas of town. I stayed mostly in the Sukhumvit area in Bangkok and the Makati area of Manila, and these places really gave me a shiny view of those cities. The very few times I did venture out, I saw a far less glamorous side of things. Volunteering is not only a way to give back, but also allows you to see both sides of the city; something I don’t always get to do. The bonus here is making new friends! Every time I’ve volunteered I’ve met amazing people – both foreigners and locals.

This is something that goes far beyond the idea of making friends, but I can’t stress it enough. Don’t plan everything! For me, the ideal trip is to just have my flights sorted and everything else is open. I know what day I leave home and I know what day I arrive home. Everything in between is a mystery. Sometimes, I may book 1 or 2 days of accommodation to start with as well. I cannot tell you how many times I’ve seen travellers strangling themselves, in tears, screaming in frustration because they have to leave a place before they’re ready. And it’s always because they’ve already booked and paid for a tour or a hotel or a flight and can’t get a refund. A lot of travellers are just wanderers – they usually make plans on a whim and then just go the next day. You might be sitting around the hostel lounge and a bunch of you will see something on the internet and be like, “Hey, guys, look at this island, let’s go there tomorrow and stay for a few days.”

Then your heart sinks. Why?

Because you’ve already pre-booked your plane ticket to the next city tomorrow, paid for your hotel room and put a deposit on a city tour. Silly you.

Keep your plans open, and the adventures with your new best friends will follow.

Understand that you are not alone

Travelling alone is scary, I know. But guess what? You’re not the only one. There’s a whole bunch of you! Everywhere you go you’re going to meet people travelling alone, and funnily enough, they’re just like you. They’re also looking for new friends, new experiences, new adventures. They’re also scared to talk to strangers. They’re also worried about not having any friends. That’s why travellers generally get along so well – because they understand each other. We’re all away from home. We all miss our friends and family. We all have no one to hang out with. But now we do.

If I can do it, you can too

I’m an introvert. Talking to strangers is not a natural thing for me. I wasn’t the popular kid in school. I’m not the life of the party. I’ve come out of my shell a little bit since I started travelling, but I generally enjoy being alone.

If you’re like me, you’ll probably spend your first few days alone too. Maybe you’ll just lie in bed and listen to your Ipod or watch TV on your laptop like I did. But sooner or later, you’re going to think to yourself, “Am I really just going to lie here and watch cartoons, or am I going to do what a normal person would do and go and talk to someone?”

And then, when you finally do, you’ll realise all your fears were just ridiculous. You’ll be better for it too, and that’s what personal growth is all about.

Think about it logically. If you see another traveller eating breakfast in the hostel and you go and sit next to him, what do you think will happen?

Do you think he’s going to look at you weird, stand up, throw his plate on the floor, slap you in the face, jump up and down, kick the table over and then scream, “What the f*ck are you doing! Why did you interrupt my breakfast! How dare you talk to me! I don’t want to talk to you! I hate you!”

So just say hi. You’ll soon realise, you have nothing to worry about. 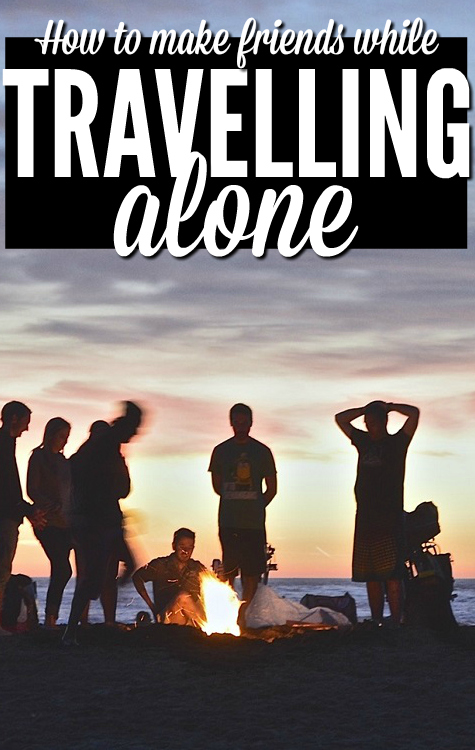 12 thoughts on “How To Make Friends While Travelling Alone”