A Day Thrift Shopping In Amsterdam

So I needed a jacket.

It was so cold in Amsterdam, and for some reason, I was without a jacket.

It’s because I have so many jackets at home in New Zealand, I’m quite sure I should never need to buy another jacket, ever. In this life and the next. And probably the one after that too.

It’s this old minimalism thing, got me on a buying boycott.

I did strongly resist this idea of a new purchase, for several days, honestly. I went out one night in three layers. Cold. Next day I had four layers. Still cold. So there was nothing to argue about after that, really. I needed a jacket.

Now Amsterdam is not a cheap city, so the obvious choice was: Thrift shop.

I actually love thrift shops. The last thing I bought thrift shopping was a jacket in Copenhagen (very similar situation) and it was five euros…or it might have been ten, I can’t remember. But it was so good I decided to keep it, after initially planning to give it away to someone at the end of my trip. I even took it with me on my trip to the UK this year. It’s basically a part of the family.

But it was no good to me now, 10,000 miles away. I was either buying a jacket today or getting pneumonia.

Problem: That would be irresponsible, wouldn’t it? Sharing a dorm with so many other travellers and all, potentially infecting a hostel full of globetrotting young’uns for the sake of thriftiness. Some of them might even be travelling to remote destinations soon, where healthcare is sparse. Buying myself a jacket could literally save their lives. If you think about it, I’m almost obligated to do it. Just in the spirit of selflessness.

Plus, it gave me something to do in Amsterdam for the day that didn’t involve smoking plants. Exactly what I needed.

The cool thing about the thrift shops in Amsterdam is they’re everywhere, and often all clustered together in one neighbourhood.

I decide to carry out this mission in Waterlooplein, which has quite a few options and is near the centre of the city.

The first place on my list is the Kilo Store. It’s barely a minute’s walk from Waterlooplein station. 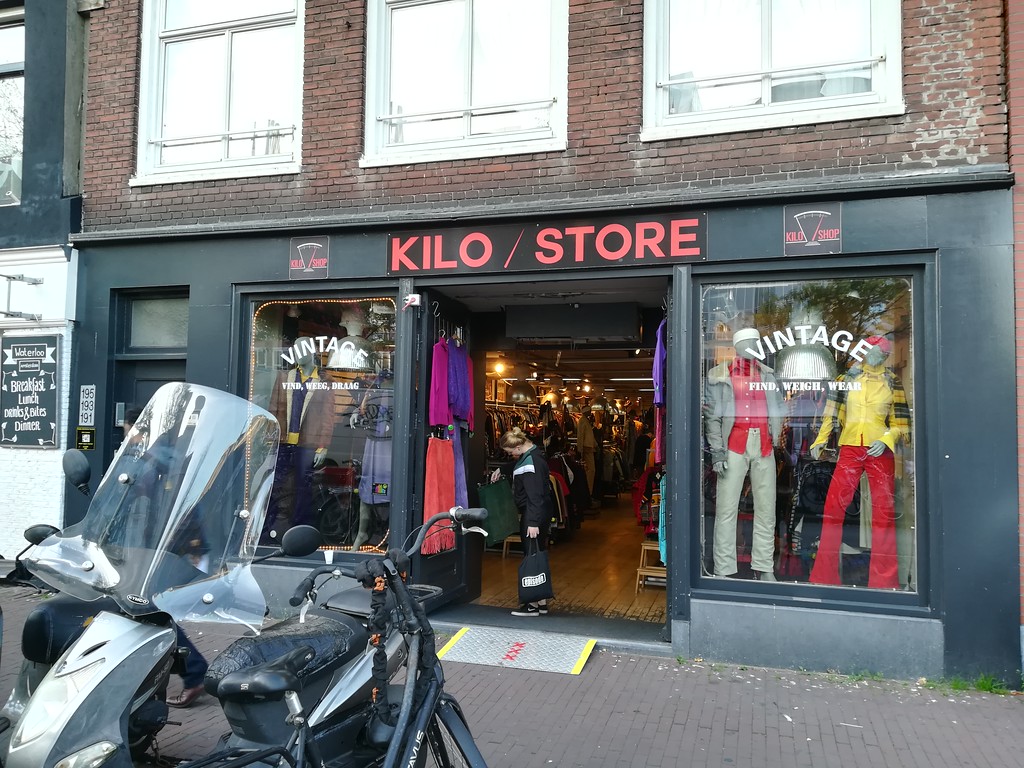 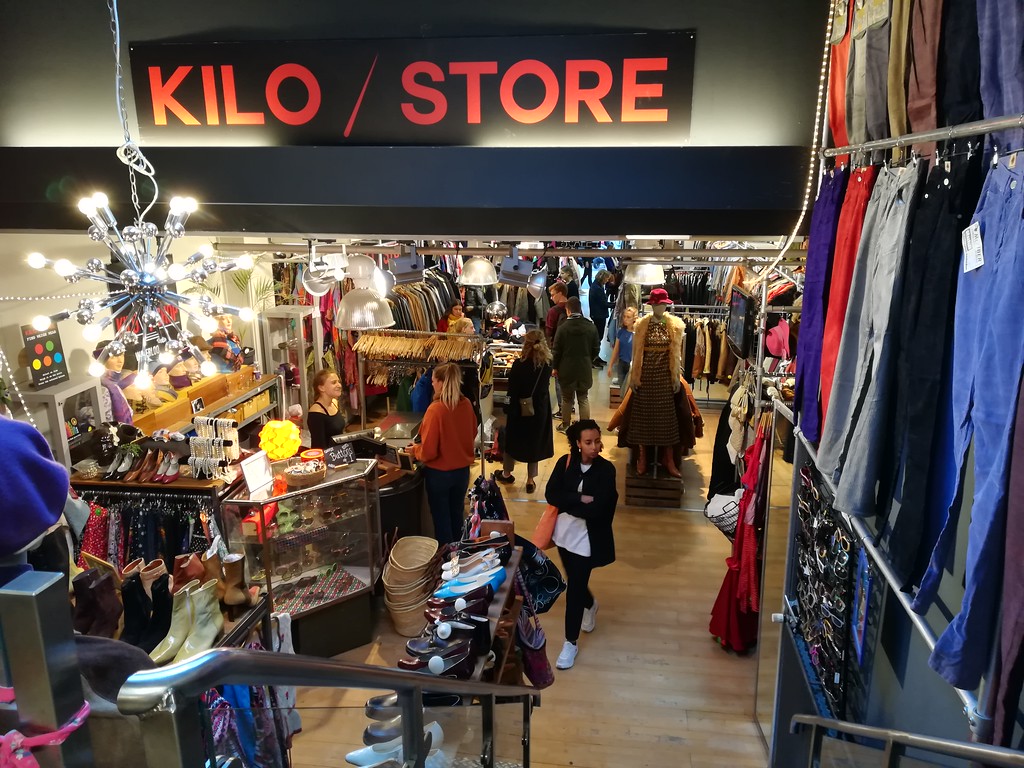 This place is supposedly one of those “weighing” places, where you fill up a basket of clothes and they charge you by weight. I’ve seen a similar store in Bulgaria, where I bought a scarf, and it literally cost twenty cents or something. But in this store some stuff has price tags too. So I’ve no idea how it all works. 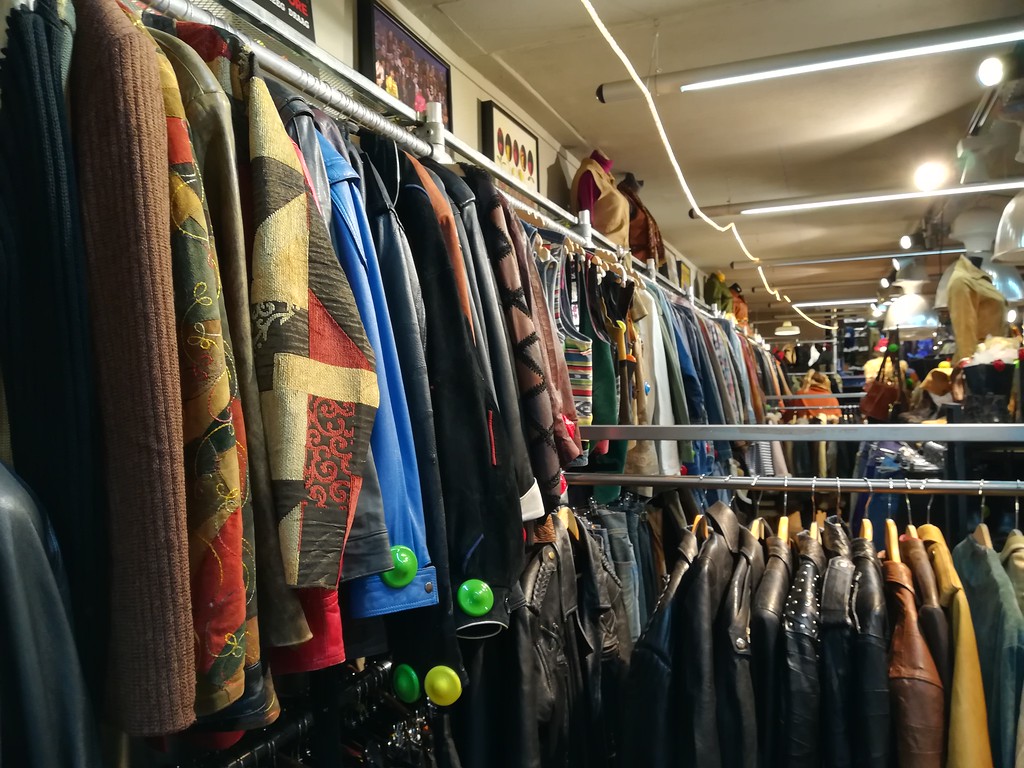 The thing about thrift stores is, you really need to look. Every single item is different.

I wander the entire store, trying to find a jacket that I’m gonna vibe with. You know, something that fits my aura, something a brooding writer would wear, one who never actually writes. Something that says, “I don’t care what I wear, but I secretly kinda do”. Something that says “I’m on a trip around the world trying to find myself”, crossed with “I actually already did that and now I’m lost again”, crossed with “I’m not a hipster but I do drink turmeric lattes sometimes.”

I don’t really know what that looks like, but I’m sure I’ll know it when I see it.

The next place I go to is called Episode, a short walk away. 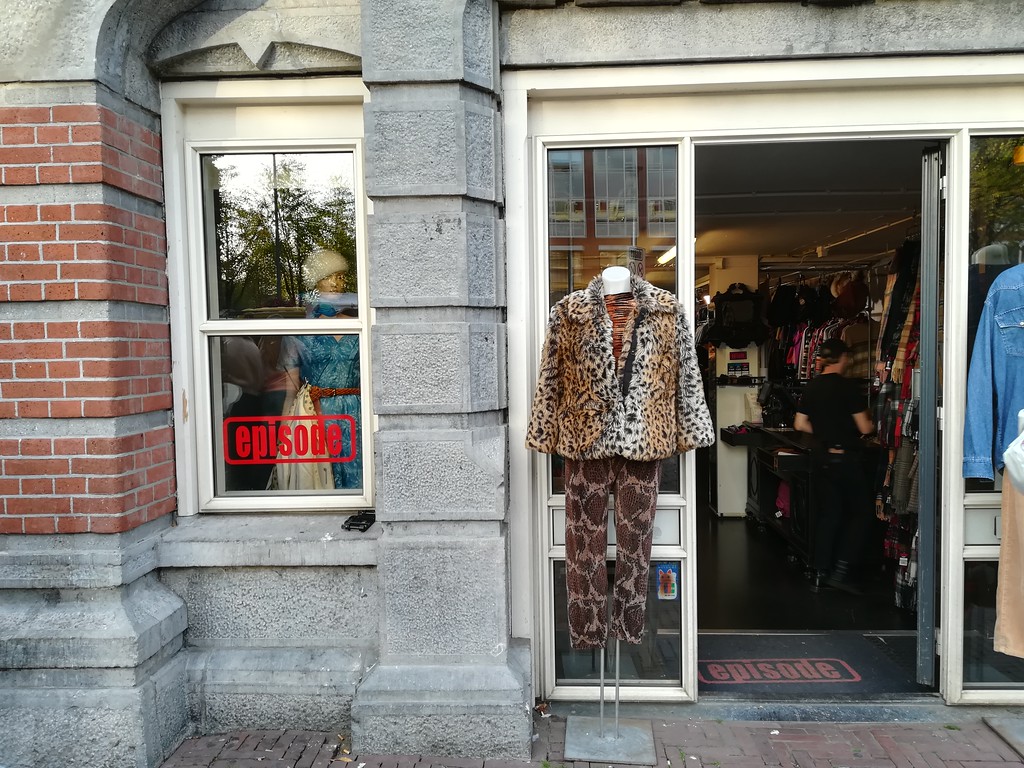 Episode is a little smaller, and a little more colourful. It actually has stores in a lot of places in Europe.

This particular store has a large selection of second hand sneakers, which I never see much of in shops like these, but it’s a little thin on the jackets. 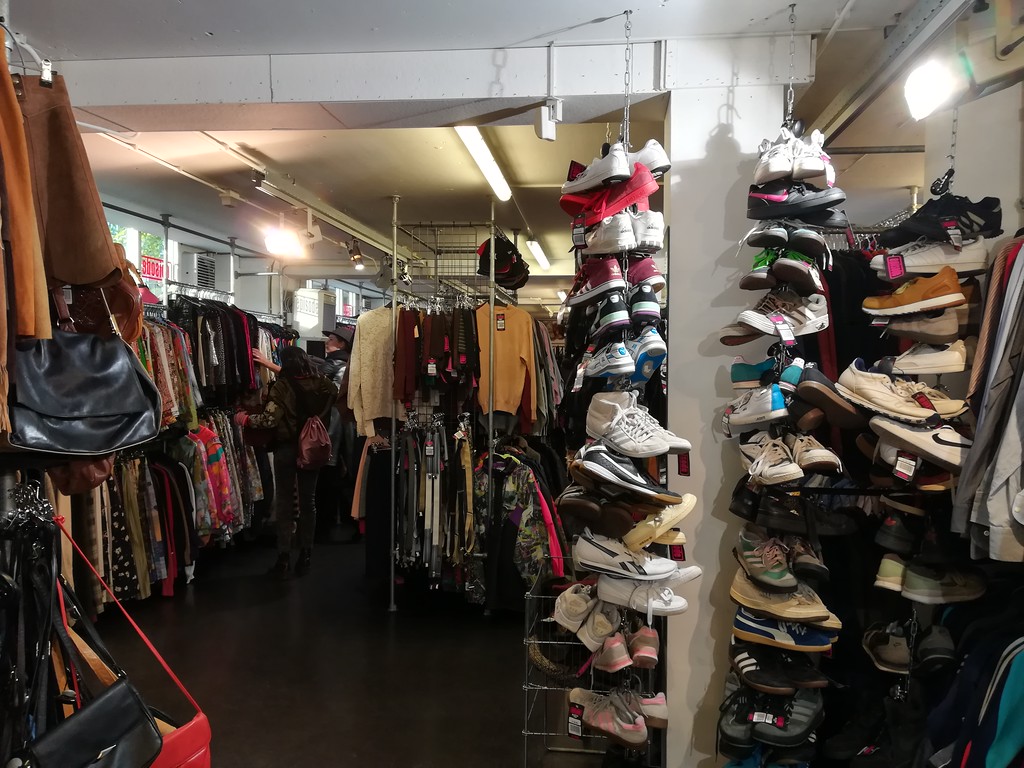 I do see a bomber jacket that I could wear and not feel like a weirdo, but deep down I know it’s not the one. It’s something you wear when you’re just starting your backpacking career, not something you wear after being ranked #33 in The Expeditioner’s Top 50 Travel Blogs of October 2014.

After a short browse of the weird and wonderful in here, I move on.

The next place is about ten minutes walk away. It’s a place called BIS Army and Navy. Despite the obvious clue in the name, I didn’t actually realise it only sold army and navy clothes until I walked in the door. 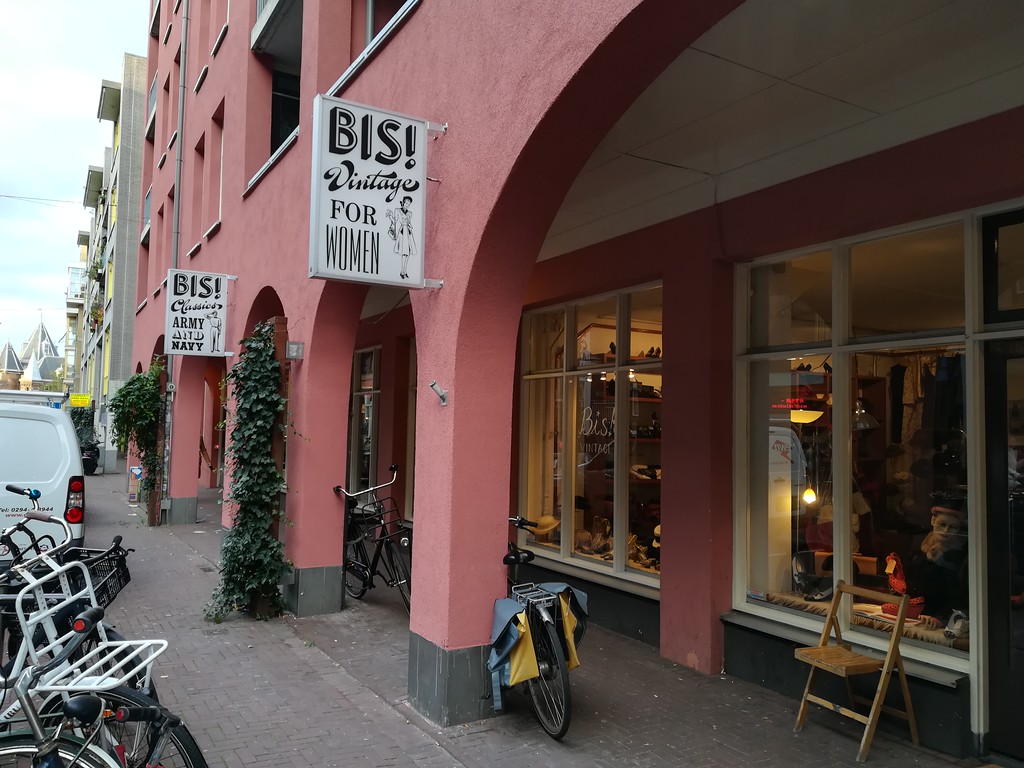 Of course to be polite, I walk around, pretending to look at stuff, and then I see a very cool jacket.

Now this jacket, which I of course forget to take a photo of, really starts to smile at me. First thing I do after the obligatory glance-over is inspect the price.

But it’s brand new. Do I deserve a brand new jacket?

Only one problem. It’s big. Big like Adele. The old Adele, not the new Adele with the six pack.

Why is this a problem? It’s not usually, I’ll date any version of Adele, especially the original one. She could sing while cooking breakfast, winters would be warm, it would be heaven. But this jacket can’t fit in my backpack. That’s how fat it is. That’s also probably why it looks cool. Fat jacket swag and all.

I ponder this decision for a long time. To buy or not to buy.

This wasn’t the mission. The mission was to buy a throwaway jacket, one that was the price of a kebab. And an exception could be made if the jacket was cool enough, but this jacket…it’s not that cool. And it’s fat. It simply will not fit inside the backpack. I would need to abandon it before my next flight, and this jacket is not in the abandon-able price range.

Begrudgingly, I put it back on the rack. I walk out of the store. As I do, I get a confirmation email in my gut, telling me it was the right decision. I smile. We’ll set fire to the rain another day.

The next stop is a place called Time Machine Vintage. 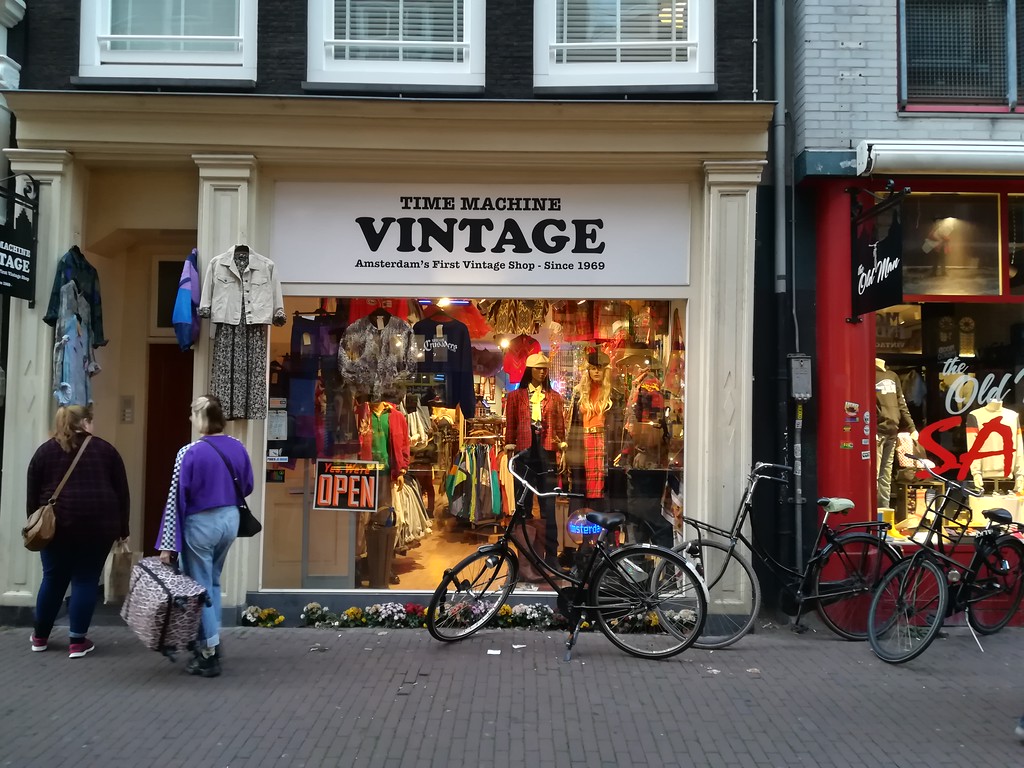 Just from the outside, I can tell my chances of meeting my perfect jacket here are slim. It’s like when you go to that bar with a friend, and you know it’s going to be terrible, but you go inside and buy a drink anyway.

I walk inside. I look around for four seconds. I walk out.

I may be a little wonky, but I don’t think I’m Time Machine Vintage wonky.

Just across the street from Time Machine Vintage is a place called Mood Indigo: Vintage Denim. 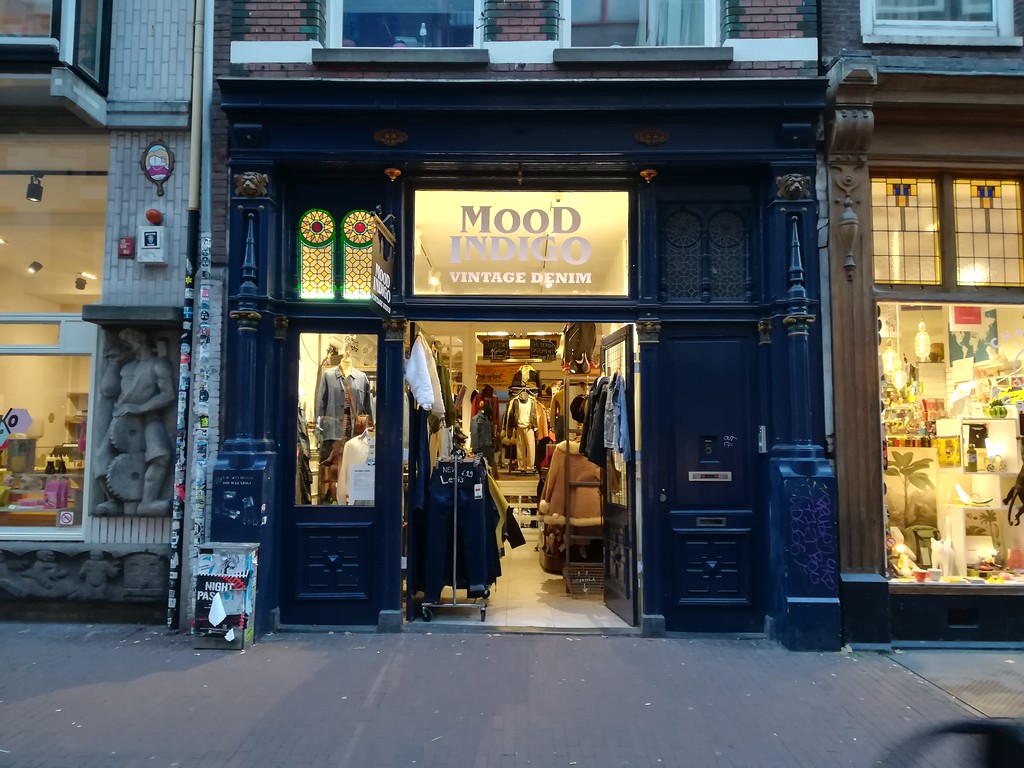 I head over and immediately things look promising.

This is the place. 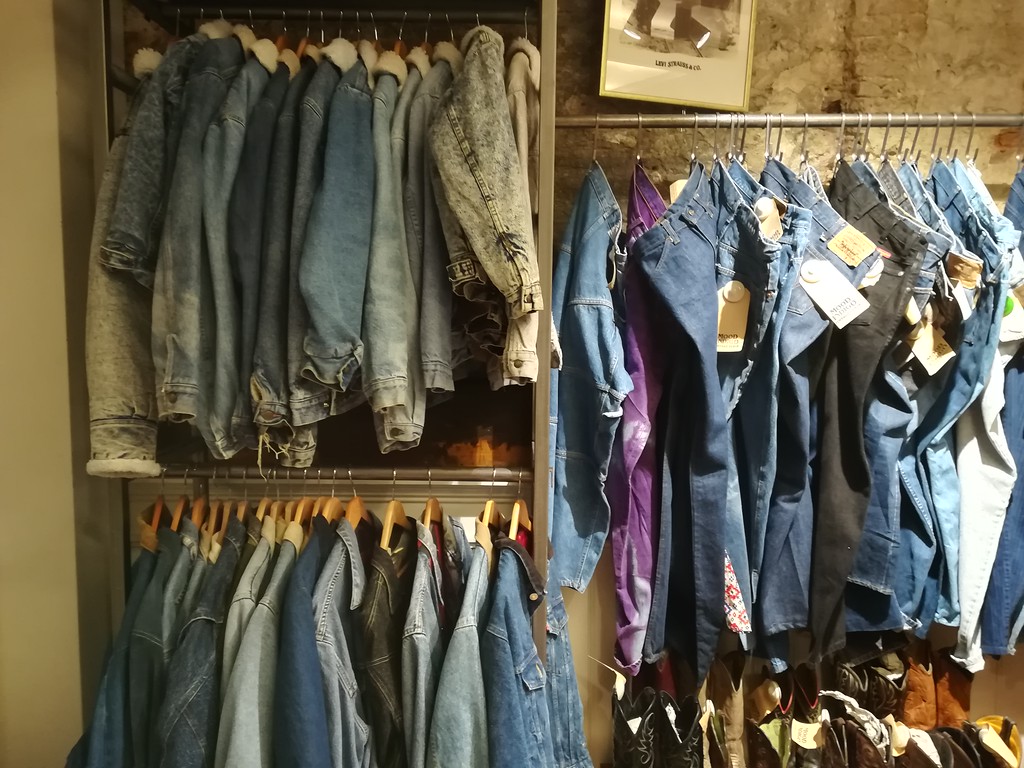 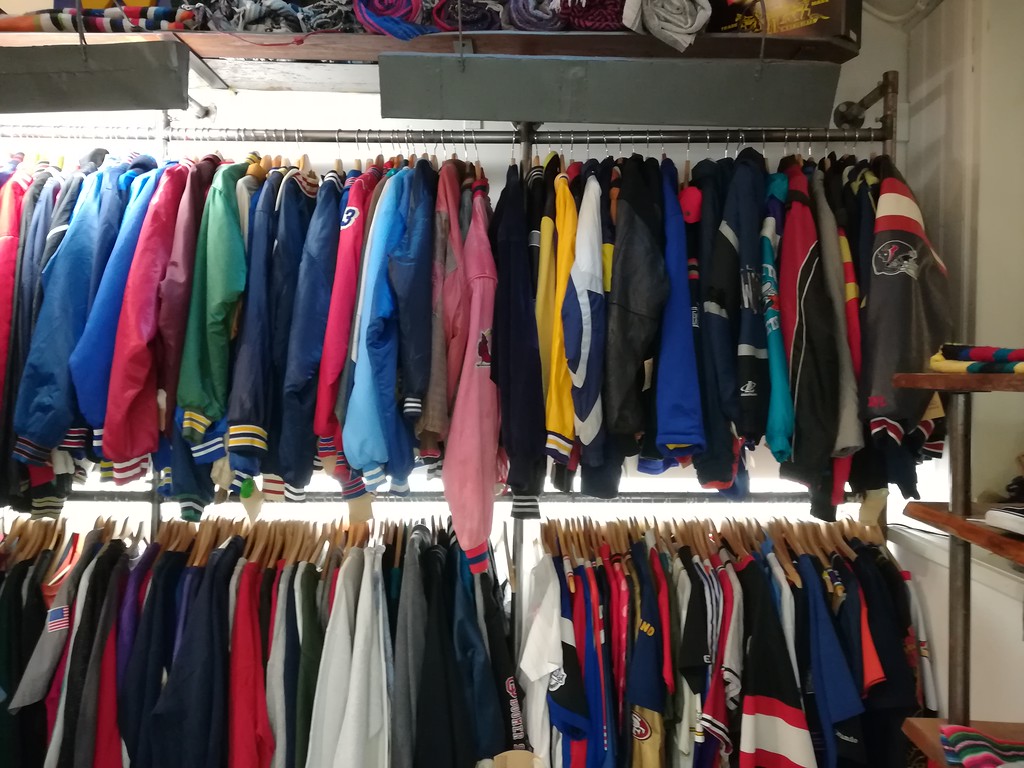 On the second rack I touch, I see something. It’s a Levi’s sherpa jacket.

This is dangerous territory. I’ve always wanted a Levi’s sherpa jacket, the one with the wool inside, especially since the Friday Night Lights era (the show, not the mixtape). I spent my whole year studying in China trying to find a cool, affordable Levi’s sherpa jacket, and it never happened, they were always $300, $400. Ever since then, this jacket has been like my Eleanor (you know, that car that Nicholas Cage…never mind).

I take it off the rack slowly, rubbing it between my fingers.

First step in thrift shopping, check the condition. Otherwise you might get attached too early, and end up convincing yourself to buy a poop stained antique.

I survey it closely for rips, stains, holes.

Next, smell it. I give it a hearty sniff.

Actually it was more like a faded musk, but whatever.

If you try something on at a thrift shop and it fits you perfectly, it’s usually a sign. The thrift shop gods put it there for you. If you put it back on the rack after that, you disrespect the shop, the moment, the previous owner whose old hopes and dreams live inside that garment. The experienced thrift shopper knows this.

I put my right arm in. Then my left. I give my arms and shoulders the manly “jacket flick”. It falls on me perfectly. Sleeves perfect. Collar perfect.

I look in the mirror.

Then I look at the price.

Brendan. My man. Think about this. That’s 69 bowls of roast duck dry noodles in Bangkok. 69 piles of mangoes from that fruit stall in Tanzania. It could even be 69 slices of margherita somewhere in New York. Maybe back in the day you were willing to pay hundreds of dollars for the perfect sherpa that you never found. But you’re older and wiser now. You’ve evolved, emotionally, spiritually. I mean, you’ve even learned to appreciate Adele’s grey-green eyes and artistic integrity and vulnerable sense of humour. You didn’t come all this way in life just to spend 69 euros on some jacket. Did you?

I go to the Levi’s page on my phone, praying to see a ridiculous price.

Suddenly feeling the pressure of this decision, I panic. I hastily return the jacket to the rack and step outside. I ask for a sign.

A hipster cafe appears next door. I sigh with relief. Exactly what I need. As I panic about buying unnecessary material possessions, I decide to remedy the situation by buying unnecessarily overpriced food. I walk inside. The chicken and edamame bowl is €11.70. Sounds like a deal.

A pleasant surprise: Chicken, edamame and pineapple is actually amazing together. Highly recommended.

As I pick up every last grain of rice with my chopsticks, my mind turns back to the jacket.

I go back to Mood Indigo.

I walk to the rack.

I put it on again. I walk around the shop three times. I look at myself in the mirror.

This is it. You want to be a pneumonia-free sherpa-wearing trail blazer or not?

I pull out the Mastercard, rub it between my fingers. I walk to the counter.

The guy gets up off his stool.

He rings it up, I hold my N26 card against the machine.

As he starts to bag it, I hold up a palm and smile.

As I walk out the door, I feed an arm through the sleeve, swing it around, let the jacket wrap me like a Levi cloud. As it falls upon my shoulders, luxury clothing pheremones emanate from my fingertips. I pull the cuff once, tug on the lapels twice. Fresh. Walking down the street, I stare at myself in the shop windows.

That’s right. It is. A second hand one. Maybe even third hand. Someone probably vomited on it once. Maybe it has pee on it. And tabasco sauce. Might have even been stolen from a homeless guy.

But now it’s mine.

4 thoughts on “A Day Thrift Shopping In Amsterdam”