Travel in India has been a hot topic recently, particularly when it comes to the safety of women travelling solo through the country.

As such, I was thrilled to find an interviewee this week who has travelled extensively through India solo and is now living in the Indian beach town of Goa.

Excited? Me too. Introducing you today to Rachel Jones from the blog Hippie in Heels! 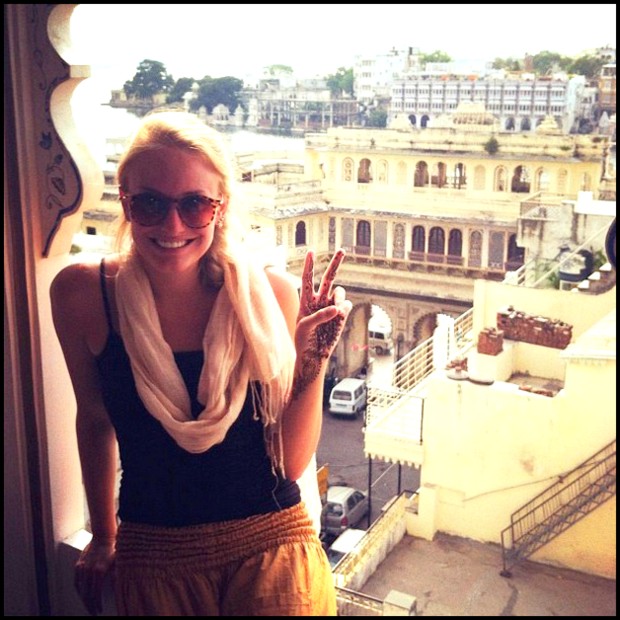 Introduce yourself! Who are you?

Hi! I’m Rachel and I run the blog Hippie in Heels. I’ve traveled for years, but have been living in Goa, India for the last 1.5 years.

What was the first trip you took abroad by yourself? What was your inspiration?

I went to Western Europe with a friend I met in college. I was already planning to go, but was hesitant to go alone. She could come for only 3 weeks, so I lied to my parents and stayed a couple weeks longer. They found out eventually! The two weeks I did alone were so much fun and that’s when I really caught the travel bug.

What’s the response been like to you going nomadic and breaking the ‘traditional’ mold of job, marriage and kids?

I think people see it as a “pause” in my life. I recently went home for the first time in a year and the main questions were, “When will you move back”, “When are you and Ben getting married?”, and “When are you having kids?” People think what I’m doing is cool but I don’t think they see it as long term. It’s SO different than life in the Midwest back home, that I don’t know if people could understand.

Many people are reluctant to travel solo because they feel like they’ll be alone and won’t meet anyone. What’s your experience?

I can totally relate to that. After budget, my second biggest fear while traveling is being alone for too long. Solo travel is great as long as you meet people. In Europe, I had no problem. Hostels are great for meeting people and you shouldn’t worry at all. In Uganda, I met no one therefore re-read all the Harry Potter books… twice. In India, I always tell people, it can be hard, but keep your chin up! There are far less backpackers. There are no hostels, only single room guesthouses. You HAVE to be an extrovert. When you are out shopping and see other travelers, talk to them. It’s that simple! While eating dinner alone, if you see another group, go up and ask to eat with them. It’s truly the best way – or you’re going to get lonely. I actually met a girl through a Couchsurfing forum and traveled with her for 3 weeks in the Himalayas!

The biggest concern for travelling solo as a female is safety. How do you get over that fear? What steps do you take to make sure you stay safe while on the road?

Ok, honestly I’m just either oblivious or dumb because I never think about safety! It’s dumb I guess. I suppose I have been lucky- I couchsurf with dudes (even in India) and know I can leave if I want, in Paris I did exactly what those girls from “Taken” did and left the airport with a stranger in a taxi – but ended up staying in a little palace in a spare home! When I first came to India, safety wasn’t a concern (really budget is always my biggest concern) – but I can totally see why it is to people who at least use half their brain 😉

India currently has a terrible reputation in the media for female travellers. You’ve been on the ground there for over a year; what tips can you offer to other solo female travellers heading to India?

Take the news reports with a grain of salt – better yet, don’t listen at all. I can say with certainty that India is not any more dangerous than any other country I’ve been to. I have no problems here. If someone does get a little too close for comfort, I tell it like it is to them and they back off. They get startled and out of shock, they back away. Actually, in more rural areas, people are excited to see you. The stories of foreigners dying here in Goa involve drugs. In the cities recently one big story involved a girl dating (sleeping with) multiple Indian men. My point is there’s always more to the story than the news provides. A couple travelers were killed in a rural town while hitchhiking. I suppose a line needs drawn everywhere and I’d say hitchhiking in India at night through a village in middle of nowhere, India, is that line. I have written 14 safety tips on solo female travel in India that I recommend checking out. Don’t go to India with fear or you won’t enjoy it. India is a peaceful nation; just use your best judgement.

Where are some places you’ve had to deal with unwanted advances or harassment from men and how do you do it?

As I said, India is safe and when men do get too close, I take care of it. One example was a man who grabbed my butt on the bus. It was crowded with both men and women; a local bus in Delhi. I made a complete scene and he was shamed into exiting the bus by other travelers. I talked about this in a post and an Indian man commented that he grabs girls butts on buses and knows it’s wrong and that my post about it made him want to try and stop. Obviously, I was speechless, as I’m sure you are reading this. Some uneducated men in India can do dumb things, just tell them to back off and be loud about it if you have to. As I said, India is safe and this happened once in almost 2 years. Men here are not used to women having a voice; use that to your advantage. Speak up!

How do you afford your travels?

I don’t like to pretend like I can live in this fancy villa in Goa all on my own. My boyfriend already lived here when I moved in with him which saves me hugely on my bills. His company puts him up here. I worked by bum off as a travel nurse and saved; I still use that money. I also make a small amount on my blog and I am a Thai yoga masseuse. I got certified in Thai massage while in India and started practicing here in Goa to help makes ends meet. It’s a great way to make money abroad and there is a demand for it here in Goa, as people are pretty much only here for vacation! All together I don’t make as much money as I did with nursing- not even close- but it’s enough for India, as this country has a low cost of living.

What are some of the ways you think travelling has changed you or your view of the world?

I have learned more traveling abroad than I did in school. I love learning history, and the tours in Europe were my some of my favorite times from all my travels. In India and Africa, I’ve learned so much about the way the world works and how self-centered it can be in America. I think travel has made me more patient and more understanding of the troubles other people face. I think everyone can benefit from travel. The world is a big beautiful place!

What are some things every female traveller should have (and shouldn’t have) on her packing list?

Well, I’m a little girly when I travel. I might be a budget traveler who stays in a two dollar room with no heat in freezing weather, but I still pack my Clinique moisture surge lotion. It’s my most important item! I also take a sleeping bag liner. It’s tiny and perfect for train travel. It will keep you cleaner and your belongings safer.

OK, a couple of fun questions – who’s your celebrity crush?

I like Emile Hirsch! He’s so cute and always plays cool roles.

And, which country have you been to that, in your opinion, has the most handsome men?

Well my boyfriend is English so I suppose England should win…. but they don’t. He’s the exception! It’s probably Greece. Is it bad I thought the most about the answer to this question?!

Imagine a Hollywood studio wanted to make a movie of your life. Who would play you and why?

Leslie Mann in my dreams! She is hysterical.

Are you a nomad for life? Why? Why not?

I think I’ll always be a nomad, but not the same type I am now. I am a contradiction in more ways that being a Hippie in Heels. I’m a homebody who wants a handful of kids and a cute little bohemian decorated house straight out of an Anthropologie advertisement. At the same time, I want to see the whole world! Sometimes I struggle with that. I left a stable career as a nurse, to be a struggling masseuse and travel writer (who got an F on her senior paper). This last year has been a huge change but one that I needed and has brought me tons of happiness. I don’t see myself going back to my old life ever. I do need to find a balance… some day. For now, I’m just fine!

Lastly, for those planning or considering their very first trip alone, what advice do you have for them? And where would you recommend they go?

It’s easy for us travel bloggers who left our jobs to tell you to just “go for it”. But I can remember how it felt. It’s not easy, and I had a boyfriend to move in with abroad! You’ll need to seriously consider your options. You won’t enjoy travel if you run out of money. Plan wisely, then make your move. I’ve never heard of someone regretting traveling more!

Rachel Jones is a former nurse who left her career to travel the world. She currently lives in Goa, India. You can follow her adventures on her blog Hippie In Heels or connect with her on Twitter at @hippie_inheels.