My New Book Is Out!

So I’ve got some cool news.

Can you guess what it is?

But instead of doing one of those press release style announcement posts, I thought I’d release this by giving you a little look behind the scenes. Because obviously my book is finally out and obviously I’m super psyched, but why did I write it? What’s it about? Who helped me? How did I write it? How long did it take? Is it organic? Are batteries included?

Let’s go back to the start.

When I wrote my first ebook, “So You Wanna Be A Traveller?” last year, I was pretty blown away by the feedback. Back then, I’d just started my blog and was a new kid on the block, so I decided to give it away for free (you can grab your copy here if you haven’t already). Thousands of you signed up to read it and a few of you even insisted on paying for it, which was really awesome and unexpected. I can’t say I would’ve done the same!

When I decided to write a second ebook, I wasn’t quite sure what to write about, so I asked you. I sent an email survey out and you told me you wanted to learn how to travel on the cheap. You wanted to know how myself and all these other travellers were seeing the world without trust funds, without sponsored trips, without big salaries, without spending thousands and thousands of dollars every month. So I set out to write the ultimate resource on budget travel. The most comprehensive, practical, up-to-date resource available. A book that would stomp the sh*t out of the expensive travel myth. A book that you could read through in a matter of days, see the big picture and tell yourself, “Shit, I can really do this. I’m going to see the world.”

Writing a book is pretty different from writing a blog post. Because there’s so much more information, you need to figure out how all the pieces will fit together. One writing lesson I always remember is that people learn best through stories. So I remember sitting down to write the first chapter, over a year ago, and I knew I had to start with a story. I recalled one morning in Peru, where I had walked to the corner store to buy some breakfast.

“I watch in amusement as she stacks the eggs, one on top of the other in a tube-like plastic bag. It’s almost like she’s playing Jenga. To my surprise, she manages to fit all six eggs in, and then, as if she’s been doing it for 45 years, whirls the bag around her finger, somehow knots it, and places it on the counter in front of me. It looked so neat you could be forgiven for thinking it was packaged on a factory machine line.

I take a quick look around her tiny hole in the wall and grab a bottle of yoghurt, some mineral water, and a small bag of bread.

I reach into my back pocket, pull out a pile of coins and sprinkle 5 soles out on the counter.

At the time I was just writing the first thing that came to mind, but I ended up keeping those words as the opening paragraph, and the stories in that chapter really set the tone for the whole book. Sometimes one tiny piece of advice can really set you along the right path.

Over the following months I continued writing each day, basically just spewing out everything I knew about how to travel the world. Pages after pages, just stories and tips and strategies one after the other, all unorganised in one big crap pile of text.

However, after I’d written around 30,000 words I stopped for a few months. Why? Because I thought the book was a stupid idea. I don’t know where the self doubt came from, but I just kept thinking that the book wasn’t worth finishing. I’ve got tons of info on my blog already about saving money while travelling, and there’s literally thousands of other blogs out there who write about it too. So I decided it was a waste of time. “This isn’t of value to anyone. Nobody will pay for this shit.” I stashed the document and went back to blogging and freelance writing.

The book sat as a Word document on my computer for around 3 or 4 months until I started flirting with the idea of writing it again. A couple of people actually emailed me and asked if I had another book or where they could read more of my writing, and that gave the idea new life again. I decided I needed to finish it. While people could probably figure out how to see the world while flipping through other blogs, maybe some of them wanted to hear it through my voice. Maybe they wanted to learn the art of travel through my lessons and my story.

Almost a year after I wrote that first paragraph, I finished the book. It came in at around 60,000 words, which was a little long for a book of it’s kind. I wanted it to be thorough and detailed, but also quick and easy to read, without any fluffy stuff that didn’t relate to the central goal of traveling the world on a budget. In the end I trimmed it down to around 50,000 words, to get a truly concise but comprehensive guide to life on the road as a budget traveller. When I read through it the final time I was stoked. It was exactly the book I would’ve wanted to read before I’d started this journey five years ago.

After that it was time for the pretty stuff. First, I needed a title. I decided on Triple Your Travel, as I liked the idea of people using budget travel as a way to multiply their adventures. See three times more of the world. Visit three times as many places. That’s what budget travel can do for you. 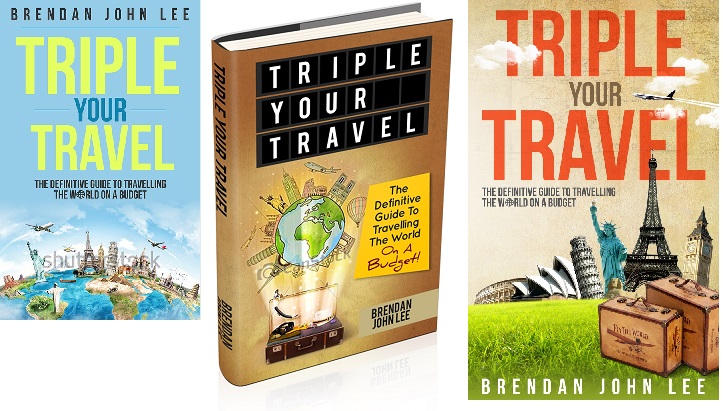 As soon as I saw these I knew I’d be designing the cover myself. I actually really like designing my own stuff but I can’t draw to save a life, so I doodled out the ideas I had in my head and sent them to my artist (the same guy who did that cool banner at the top of my page): 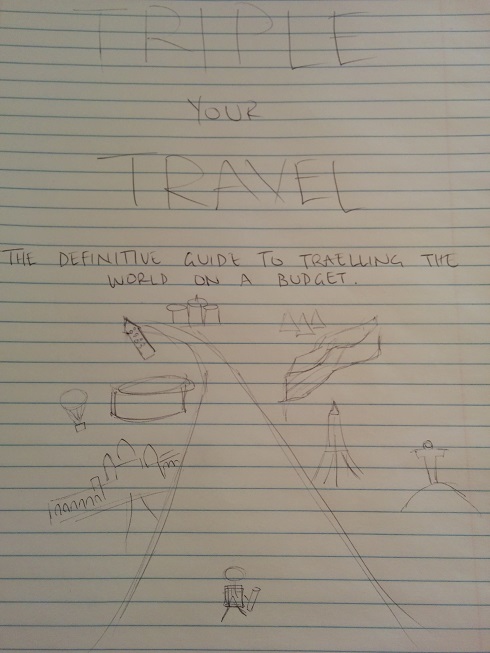 Can you figure out the landmarks? You probably think you’re looking at a donut, a rocket ship, some corn chips and a slice of fish, but it’s actually Angkor Wat, the Colosseum, Leaning Tower of Pisa, Taj Mahal, the Pyramids, the Great Wall of China, the Eiffel Tower and Christ The Redeemer.

After some back and forth with my graphic artist, who can actually draw, we turned it into this: 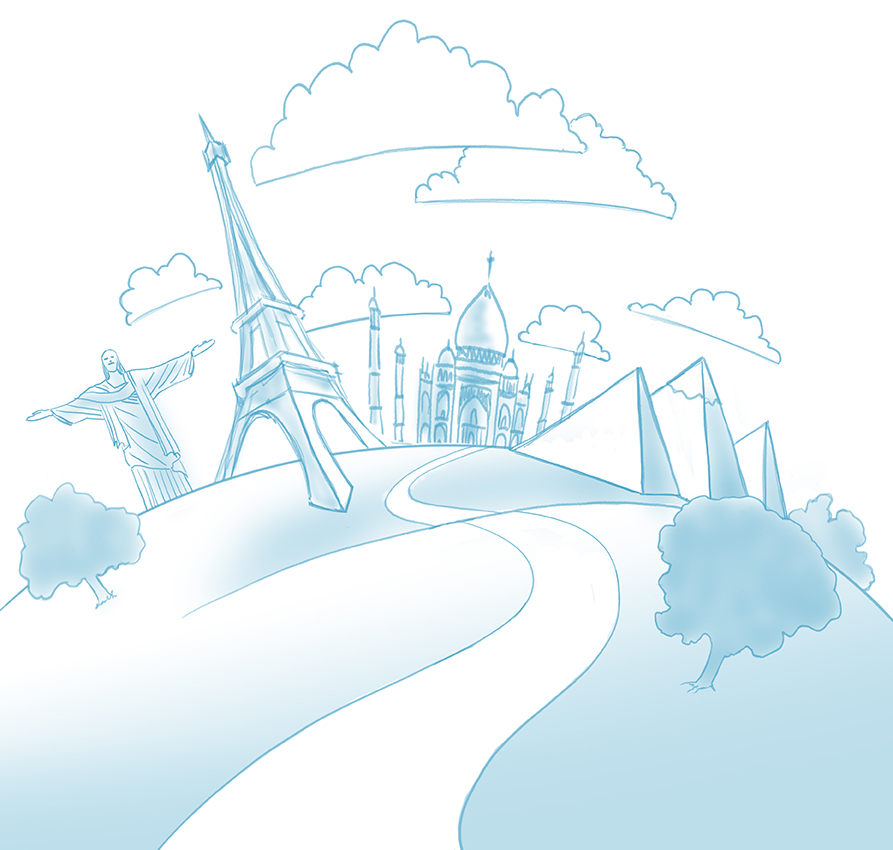 I actually wanted to add more landmarks but that was going to cost more money and I was being cheap. So I just told him to add some colour, and he came up with this: And I hated that. I told him this looked straight out of Oregon Trail, and we needed to make it more ‘Bren On The Road’ style, so he came back with this: 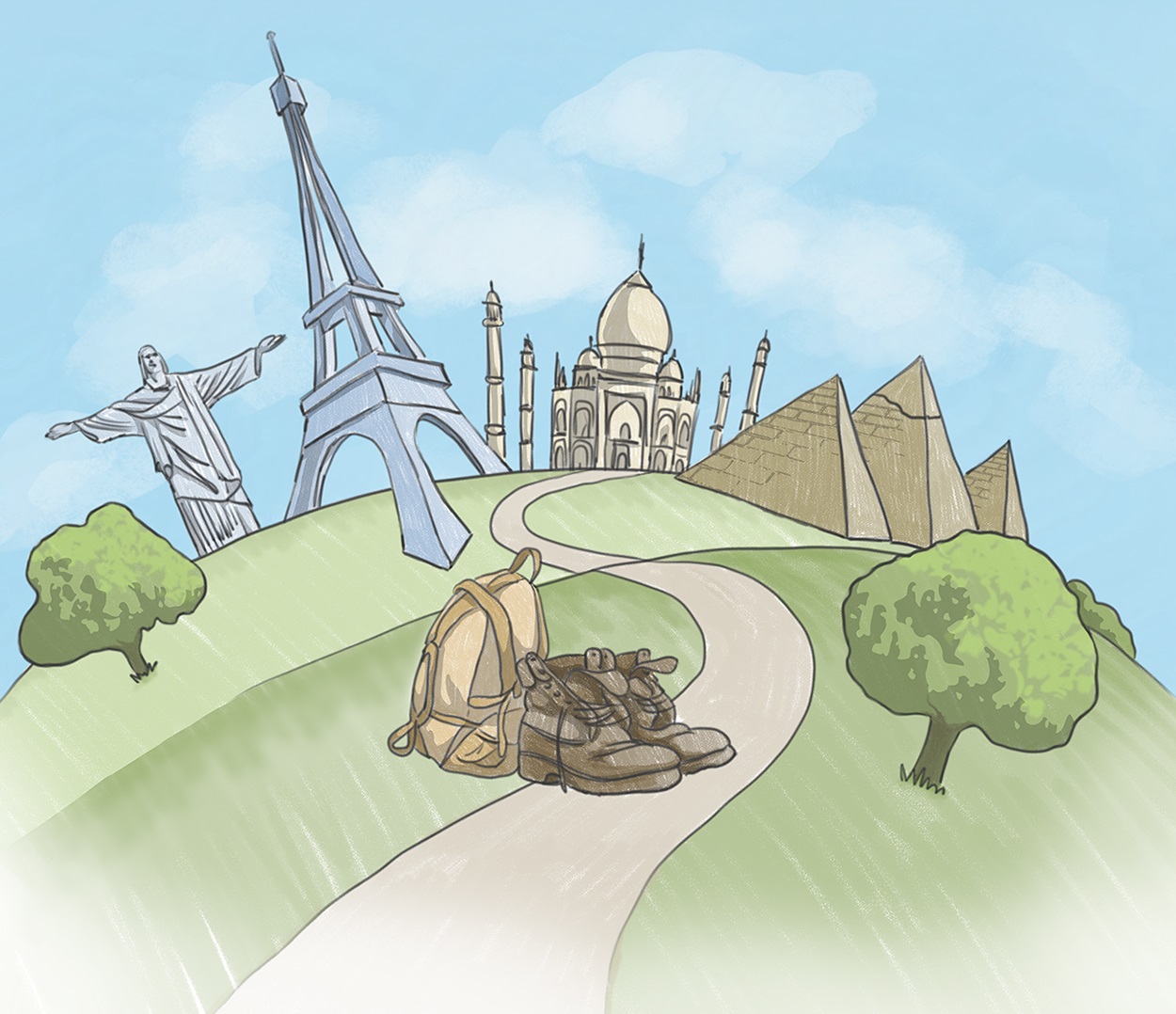 And she was the one. I actually want to turn this into a patch and stick it on my backpack!

Now I just needed to turn it into a cover. My brother is a designer so I worked on some concepts with him. We came up with a few things and went back and forth trying a bunch of different designs, taglines and layouts:

After a few weeks of messing around with it we finally came up with our winner: 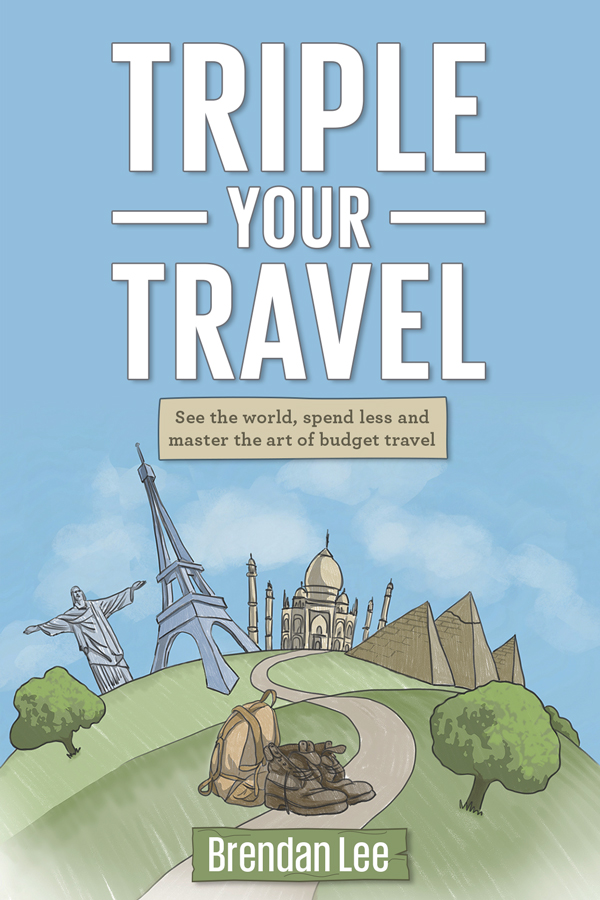 Sorting that cover out actually took 10x longer than it should have. I still hadn’t edited the book! I decided as far as writing went I was out of good ideas, so there’d be minimal editing. I just needed to proof read it, clean out the mistakes and publish it. I remember my English teacher always told me never to proof read on the computer, so I printed the thing out and started going through it. Check that monster out! 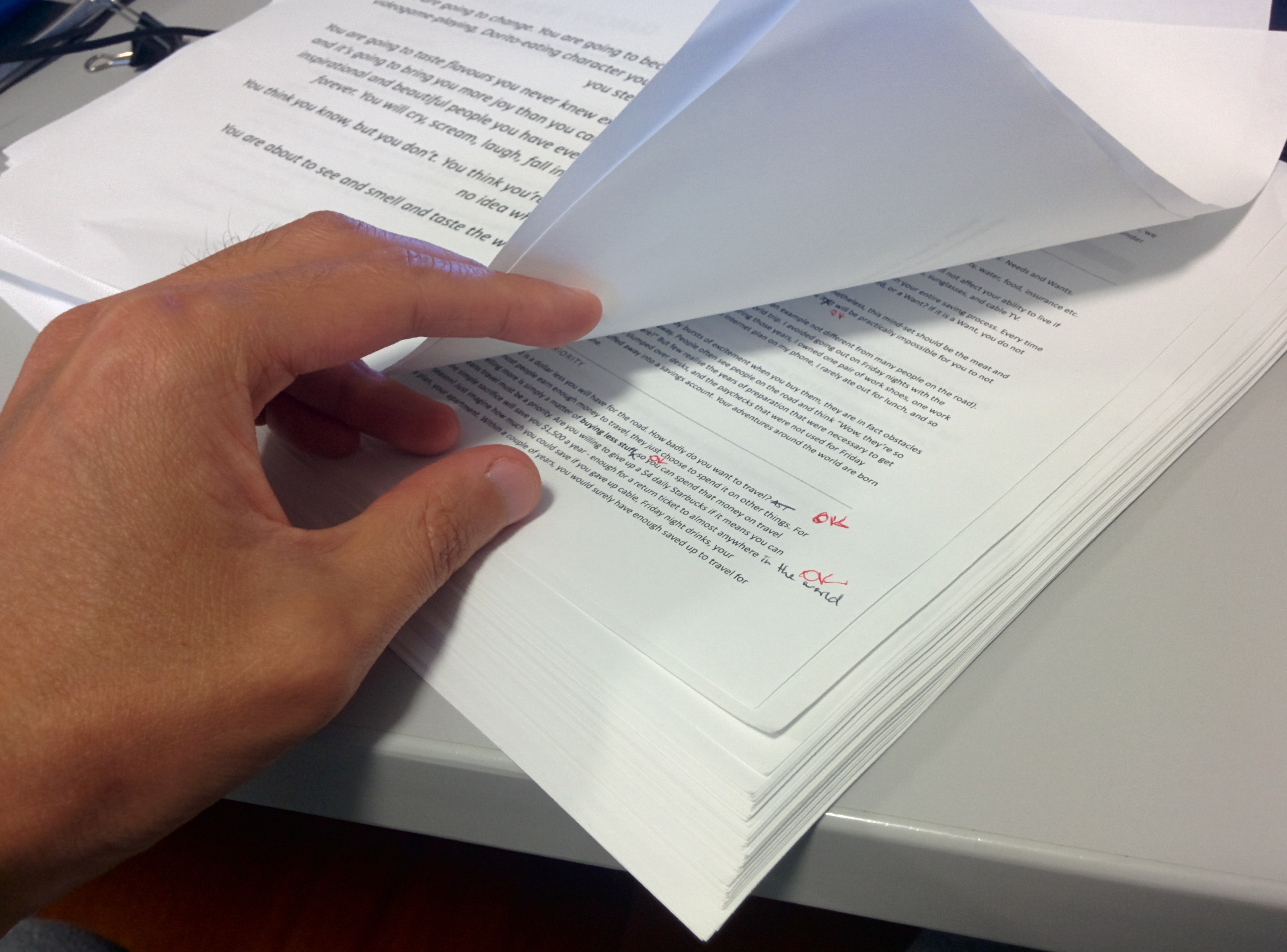 Lastly, I had to design the book itself, such as the page layouts, font style, font size, colours etc. Again, my designer brother was up for it so we worked on a few concepts and he did a pretty awesome job putting it together. If you’ve read my first book, which I designed myself, you’ll definitely see the difference! He was able to pick out a lot of design flaws that were way beyond me, I’d never have spotted that stuff in a zillion years. The result is a really polished ebook which should be super easy on the eye and is hopefully a pleasure to read. It’s kinda hard for me to showcase that here, but you’ll see it if/when you read it!

So, that entire story was really just a roundabout way of saying: my new book is out! If you do end up buying it, thanks so much – seriously, you’re awesome. And if you don’t because you’re broke and have no money, well, you’re still awesome and I sincerely hope you’ll stick around and keep reading my blog.

You can read more about what’s inside and grab yourself a copy here.

And honestly, thanks so much guys. All of you who have liked a post, commented, tweeted, shared, even just mentioned this site to your friends over these past 18 months, you’ve been a part of getting this site to where it is today. This thing has already grown bigger than I ever thought it could, so thanks so much for all the support, you weirdos. It’s been awesome and as long as you’re reading I’ll keep writing.