There are few places in the world where you can truly walk amongst animals in their natural habitat. Most of the time you’re staring through a cage or out a safari truck window. However, in the heart of East Africa you’ll find the last natural habitats of the majestic mountain gorilla, and for a price, you can walk amongst them.

Gorilla trekking is possible in 3 places – Rwanda, Democratic Republic of Congo or Uganda. Congo’s reputation is that it’s a little unstable and visa issues are common. Rwanda and Uganda are far more tourist friendly, so naturally these two countries are the most popular. In the end, we chose Uganda. I also had the pleasure of sharing this adventure with my parents, who were setting foot on Africa’s sacred sands for the first time. We hadn’t travelled together in more than 10 years.

Uganda’s mountain gorillas are located in the Bwindi Impenetrable National Park, a deep, dense forest out in Bwindi province.

If you’re interested in going gorilla trekking in Uganda, here’s what you can expect:

Day 1 of the tour and we’re up before the sun. The guesthouse staff are also awake and invite us to indulge in a well-rounded breakfast of fruit, yoghurt, cereal and eggs. A welcome surprise.  Our guide arrives a little late, maybe 7am, but without too much fuss we’re on our way. I strategically dress in the closest thing to pyjamas that I have, ready for 8 hour drive ahead.

With lack of a better thing to do, I take a kip and 2-3 hours later wake up with a good amount of sleep in the bank. From there it isn’t long before we arrive at our first mandatory stop – the equator. A straight line runs across the road, and while standing upon it you supposedly have one foot in the northern hemisphere and my other in the south. We oblige and snap our pics, which feels like more of a gimmicky photo opportunity than anything else, Still, something to show the grandkids someday. 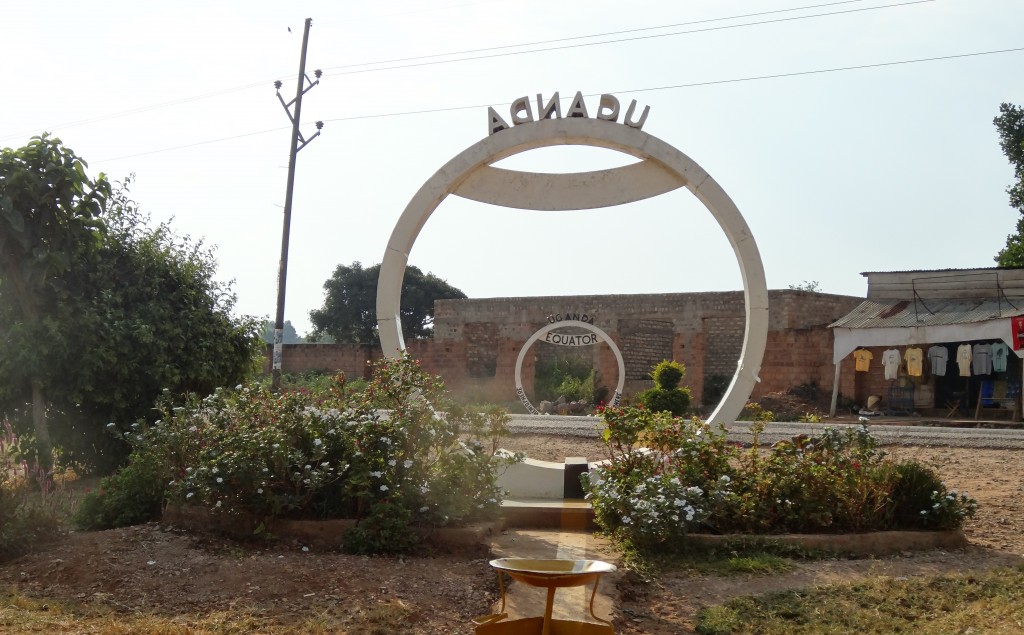 Another hour in and Mum and Dad start to question why the car panels were shaking so hard. In Africa I just tend to grind my teeth through such things, and assumed all the shaking was just a bumpy road and few loose screws. As it turns out, our wheels were unbalanced and needed to be un-unbalanced, which apparently is really important (who knew). As a result, we charge the next couple of hours to finding a chop shop and getting this thing sorted. Dad is bit of a metalhead and starts pokin’ around, fascinated by the old school equipment they’re pumping. Mum’s throwing a tantrum at our shitty “custom built top of the line 4 wheel drive”. For me,  this car stuff generally flies over my head so I go wandering around this tiny Ugandan town. People stare at me like I’m Jackie Chan, with all the young guys fist bumping me and doing karate chops. In a few minutes I manage to find a Vodacom store and purchase a simcard, while the girl at the counter looks at me like I’m an alien. I introduce myself and she relaxes, finally realising I’m human. 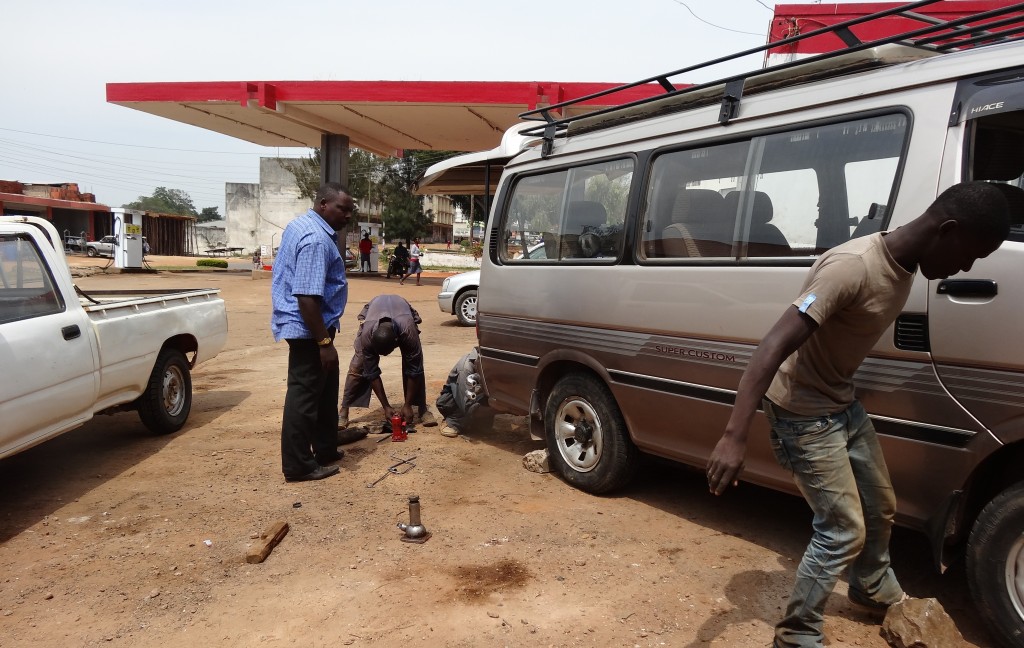 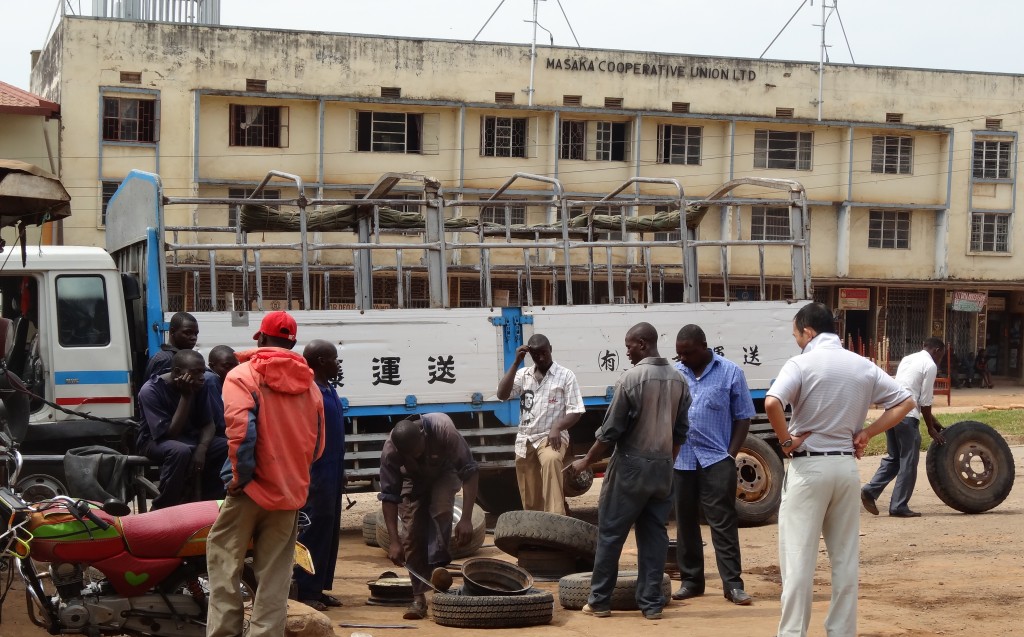 2 hours later we’re back on the road. To me the car is still shaking just as much as before, but Mum and Dad seem satisfied. Must be the extra years of experience.

The drive is smooth sailing until we reach the mountain roads. They wind around in circles and the thick, brown dust is intense. Nonetheless, some of the views from these heights are spectacular.

Finally we arrive at a gate. A security guard opens up and we drive slowly through a village road, lined with rundown wooden houses and local villagers sitting out in the moonlight. We all look through the windscreen anxiously, wondering where we’ll be sleeping after a long day on the road. When we finally show up, I’m actually blown away by the place. My room is half tent half house, complete with towels, linen, flush toilet and hot water shower. Being out here in mother nature’s territory I thought I’d be working a sleeping bag in a mud hut. High five, Uganda. 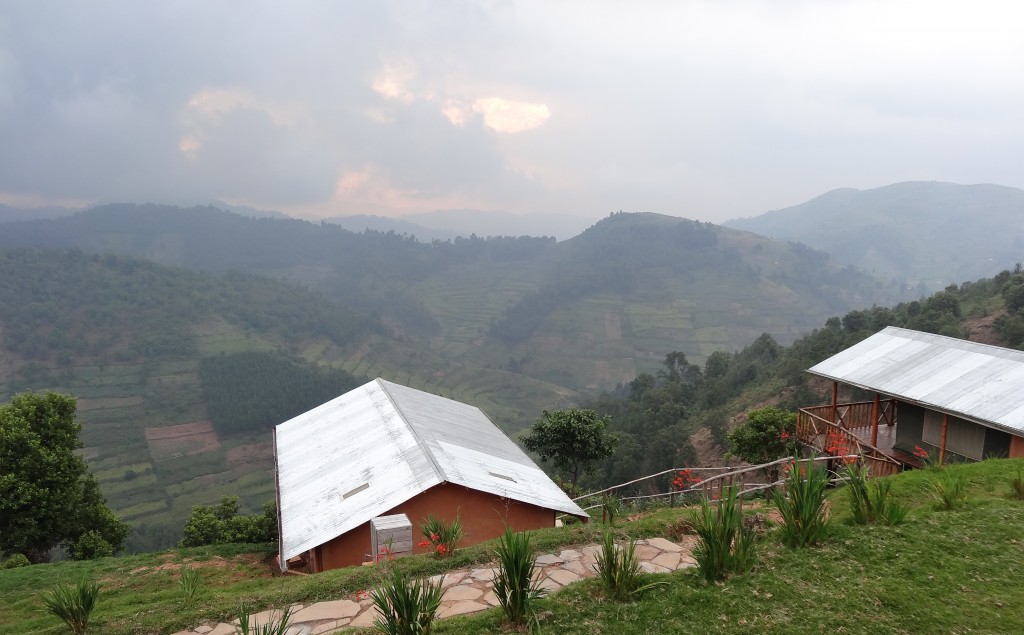 The view from our ‘tents’ 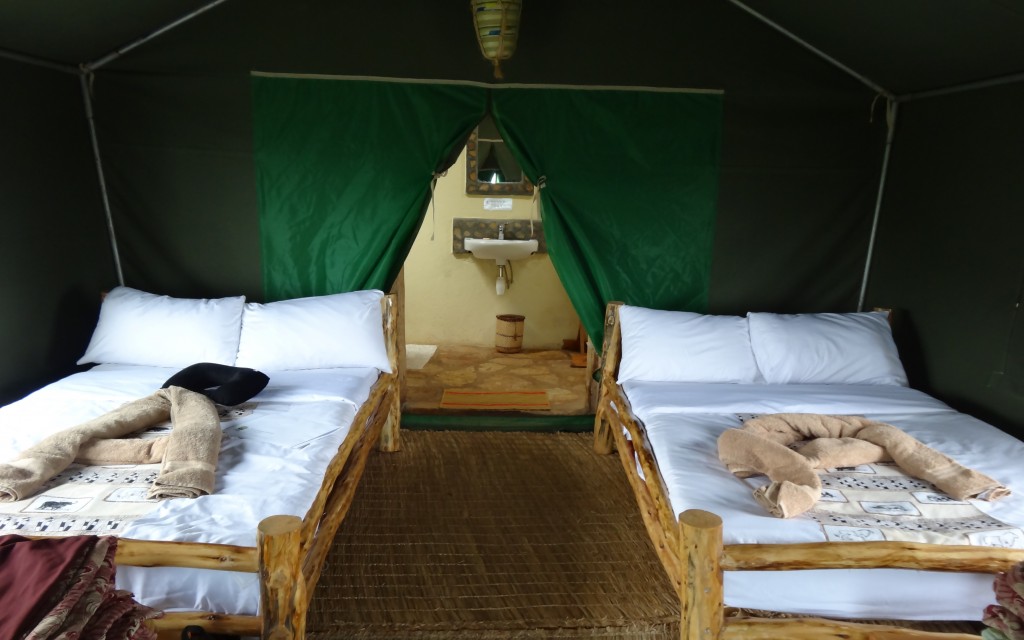 The next day is gorilla day. It’s a 6am wakeup call and a short 10 minute drive to the check in spot. When we arrive, we’re briefed warmly and efficiently by a couple of gun toting rangers. The lowdown: prepare for lots of walking, don’t let gorillas get closer than 7m, cover your mouth when you cough and sneeze and take lots of water. That’s it for the motivational speech and within moments we’re back in the van and off to gorilla land.

Once we hit the bush I repeatedly thank fate that I paid the extra $10 for a walking stick and got me some decent Timberlands. This was no regular bushwalk like we have back in New Zealand; it was like virgin forest down there. That meant no signs, no paths, lots of thorns, rocks, bugs and slippery stuff; not what I was expecting at all. Up the front, our guide wields his machete with a vengeance, relentlessly slashing away every stick and branch as if the trees are trying to kill him. 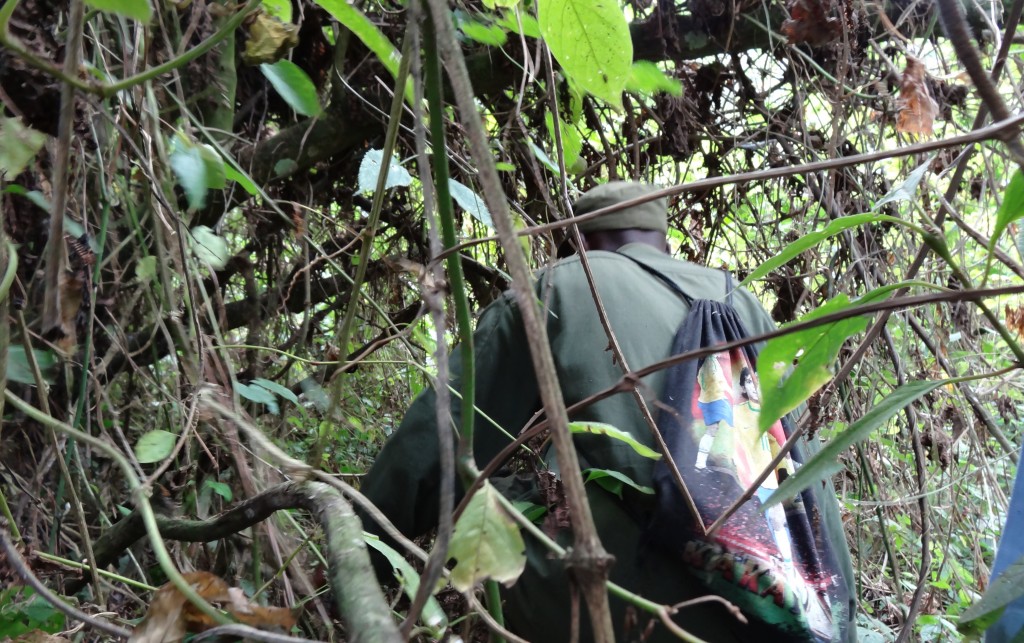 The bush is thick and uninviting

2 hours pass and we’re well into the thick of the forest. Then, I hear a bunch of radio chatter and the guide stops us in our tracks.

I can feel the group’s adrenaline spike as if we had entered Jurassic Park. I look around and see nothing. The bushes a few foosteps away from me rustle softly, and the guide parts the branches with his machete and peeks through. I assume it’s just another ranger chilling with a cigarette, but as the guide waves me over I glance around the bushes and realise how wrong I am. It’s a freakin’ gorilla, sitting no more than a car’s length away from me. Naturally you would take a photo, but I don’t. I’m frozen and mesmerised. I watch him sitting there, fiddling with the branches like a knitting Grandma on a Sunday afternoon. For some reason I feel the need to whisper, as if he’s going to turn around and wrangle me if he figures out I’m here. It didn’t matter; it was as if I wasn’t there anyway. I stand there staring at him, and unlike most animals, he doesn’t even flinch. It’s incredible. 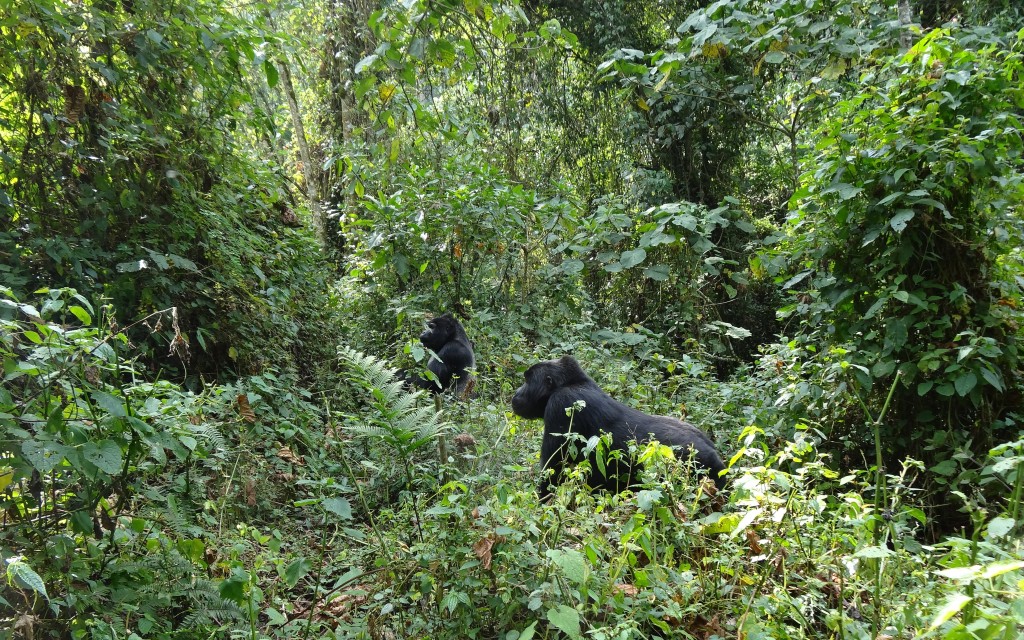 Then, they start to move. The guide takes us in a different direction to flank them, trying to keep up. As slow and lethargic as they appear, they can move surprisingly quick. Then suddenly, he raises his hand and stops us as we come to a clearing.

A few seconds later a couple of kid gorillas tumble through the bushes in front of me, literally centimetres from my feet. I nearly pee my pants.

We spend the next hour following them through the forest. It’s a little hard to keep up, as their enormous bodies just tumble through the brush while us inferior humans need to poke our way through with our little machete. Luckily they stop every now and then, chilling in the sunshine and eating trees. It’s the perfect chance to snap a couple photos. 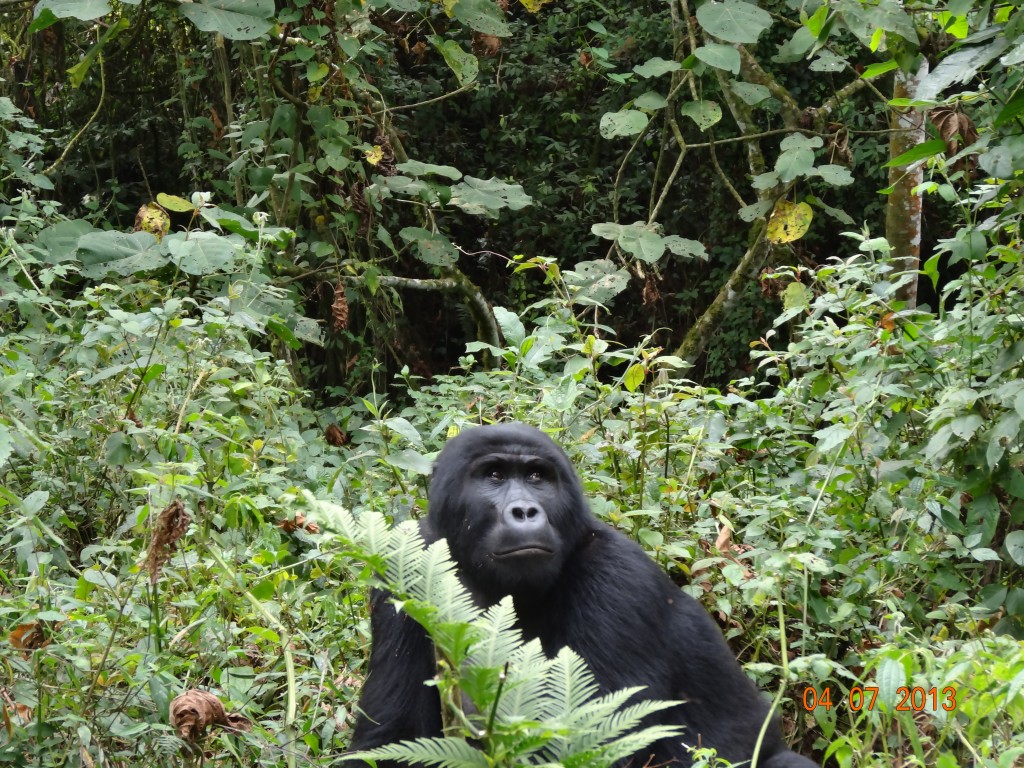 A few moments later we finally see the Silverback. The guy is a monster, it’s like seeing Kong Kong in real life. A good 4 or 5 of them are together now and we try to follow them while they move as a family. While I try to concentrate on not falling into all the thorns surrounding us, I hear a massive roar and look around in a panic, startled. I catch a glimpse of King Kong facing us, around 20 metres away, arms in the air and bellowing into the sky. He towers above the other gorillas and slams his fists violently against his chest, roaring ferociously. I freak and without a second thought I drop my camera and flee, ready to run for my life until I notice the guard still standing beside me lax as ever. He laughs.

Right. I knew that. 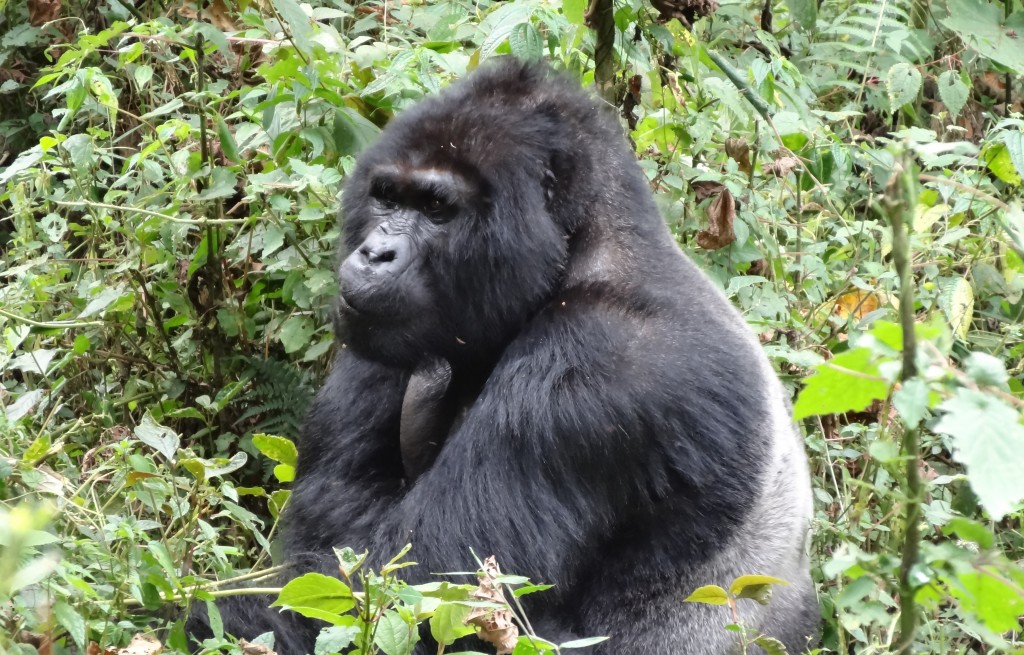 It’s not long before our scheduled hour is up. We follow them up a small slope for a couple more minutes, desperately trying to snap a few more photos. I try to get the perfect shot that has eluded me, but sadly it doesn’t happen. 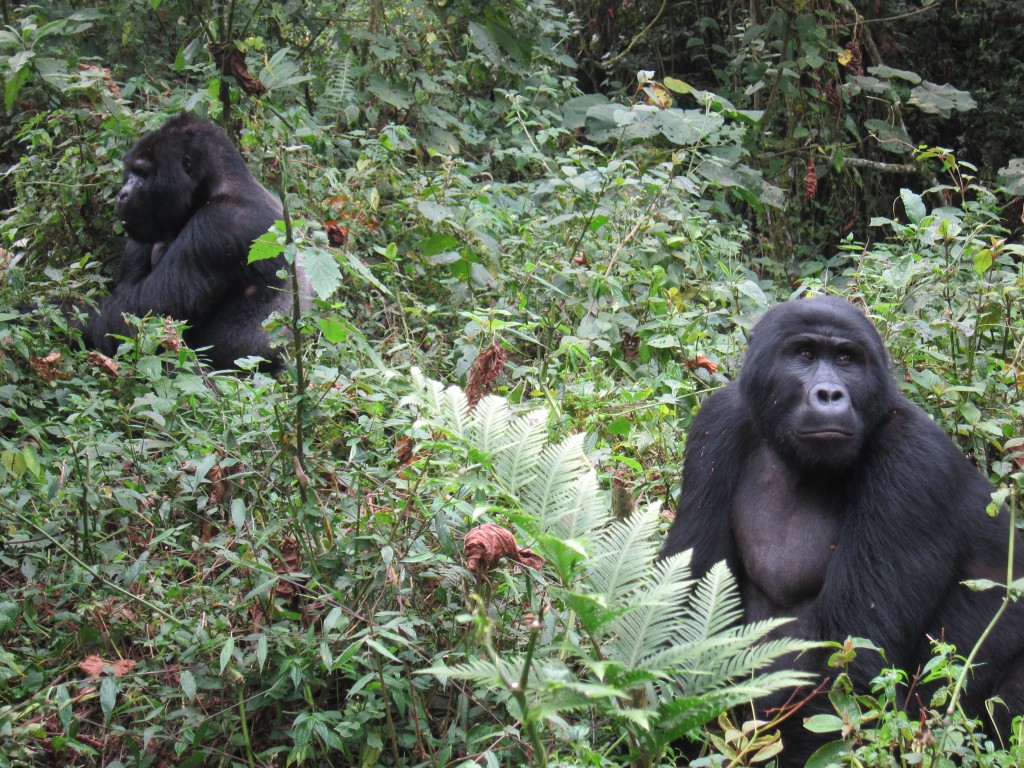 It’s a good 45 minutes back up to the main road. The forest is like a massive crater, so the hike back is uphill and infinitely harder. It doesn’t matter – we’re all still buzzing from the magic experience. I could’ve stayed down there all day with them, but it makes sense to get out and leave them be. After all, it’s their home, not ours.

A few more near vertical climbs and we’re finally out on the main road. We stand around and catch our breath, maybe still in awe of how damn cool it all was. 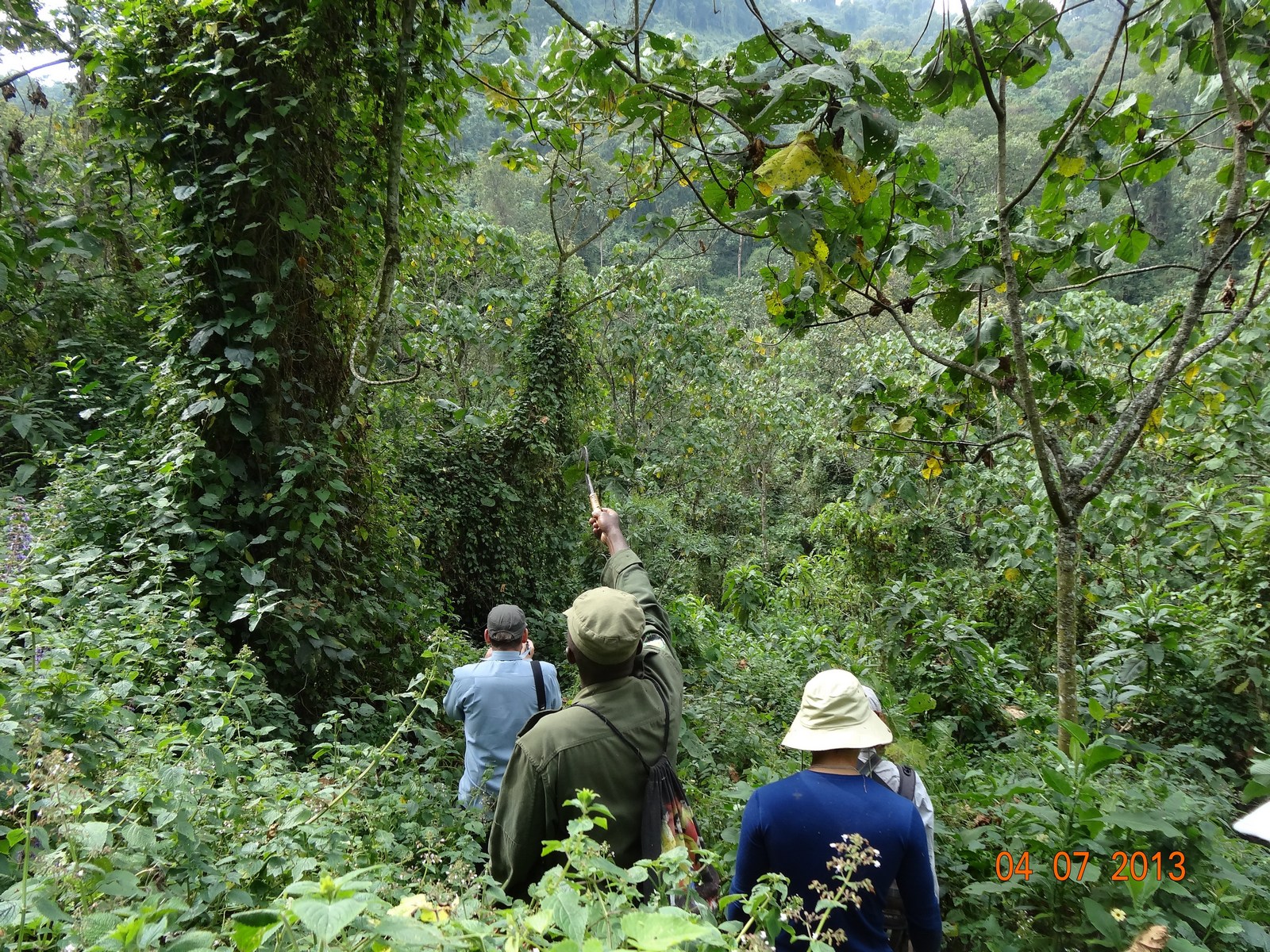 Even today, I’m still amazed at how crazy it was to be so close to them. What the photos don’t really show is how beastly they really are. They have biceps the size of soccer balls and a D cup breast of pure muscle. Say the wrong thing to one of them and he can pick you apart like a chicken wing. It’s also incredible how they’re at complete ease with a bunch of strangers with rifles poking around their habitat. Completely fearless creatures, but peaceful too. To walk alongside them is an out of body experience so surreal that you may not even believe is happening while you’re doing it. I can’t recommend it enough. It’s one long drive and $500 that you’ll never regret.

If you want to go Gorilla Trekking:

The easiest way to do it is via an arranged tour. It will run you around $800 for a single person all inclusive (transport there and back, accommodation, trek fees).

I would highly recommend this approach for first timers in Africa. If you’re well travelled in Africa or a hardcore backpacker who doesn’t mind getting lost now and then, you’ll be OK buying yourself a permit from the tourism office and then getting to Bwindi and arranging your accommodation on your own.

The Uganda permit will cost you $500 USD at a normal rate. In low season there can on occasion be discounts. You need to ensure you book in advance or have a flexible timetable, because the number of permits available is limited and once they’re gone, they’re gone.

The Rwanda permit will run you $750 USD. However there are other things to consider:

In summary, Rwanda is more expensive, but saves around 12 hours in transport time and is a more photo friendly environment. Uganda is cheaper and has more gorillas, but it’s a much longer drive and the forest is thicker and harder to trek through. As for the gorillas themselves, you can read a whole lot of interesting facts about them here.

Whichever you choose, I can guarantee you it will be unforgettable!

Some clips from the trek:

4 thoughts on “The Gorilla Trek: A bushwalk you’ll never forget”