Why You Still Haven’t Found Your Passion

When he was 12, he got his first guitar. With no idea how to play it, he stole a chord book from a department store and started teaching himself. By age 13, he was playing backyard parties and by high school, he was getting snuck into nightclubs to perform with his band.

Around the age of 15 he left high school to pursue his dream of becoming a musician. Thinking he may have made a mistake, he went back to high school to re-enrol two weeks later.

“I don’t want you to come back,” the dean said to him. “This music thing is your passion. I think you should follow it.”

He took the dean’s advice and moved to California with his band to make it big. Flat broke, he sold pens over the phone to pay the bills as they tried to break into the local music scene. They scored a series of small opening gigs, but struggled to get the record deal they had been dreaming of.

By now he was 21. A friend of his who worked as an actor suggested he try acting instead.

“Why don’t you come and meet with my agent?” his friend suggested.

At the meeting, the agent suggested he meet with a casting director, who at the time was casting for a low-budget independent horror film.

Despite having never acted before, he went to the audition.

He got the role.

Why am I sharing this story with you?

It has nothing to do with acting or music or movies. You could easily replace ‘acting’ with ‘surfing’, or ‘high school’ with ‘work’, or ‘audition’ with ‘dance class’, and it would still be exactly the same story. The lesson is in the journey.

We all want to be passionate about something.

Our passions give us purpose. They excite us. Make us feel alive.

Yet so many of us struggle to find it.

They say the luckiest people in the world are those who discover their passions young. Whether it’s music or dancing or building robots, it is a blessing to discover it when you’re seven or eight years old. You have your whole life to explore it, enjoy it and master it. You can truly spend your entire life doing what you love.

Sadly, most of us take a lot longer, or never find it at all.

Because we don’t look for it.

When we talk about finding our passion, the word people focus on is passion. Instead, we should focus on the word finding. Because finding your passion is the same as finding anything else. You need to look for it. It takes time, effort and patience.

Think about all the opportunities you have to find your passion. Every day people ask us to try something new. Yet we say, “I’m too tired” or “I have to go to work” or “I want to sleep in”. We’ll sleep for 8 hours, work for 8 hours, but we won’t even spend 15 minutes looking for our passion. We just expect it to fall into our lap while we’re watching television.

But he didn’t. If you’re a fan of Johnny Depp, you will know his passion for acting is endless. He is obsessed. But he didn’t find his passion young. It didn’t bubble inside of him as a five year old like it does for some people. He discovered it by accident at 21. It wasn’t his first love. That was the guitar. But he kept looking for something to love, and he found it. He grew up dreaming of the Grammys and ended up at the Oscars, and he did it by saying yes to every invitation life gave him from the moment he got his first guitar.

What about you? Do you ever say yes?

Every day people complain their life is empty.

“There’s nothing to do.”

If your friend asked you to go to their book club tonight, would you go? I already know 99% of you would give a D-grade excuse like “I’m too tired from work.” But you might read one sentence at that book club that inspires you to do something. You might meet someone amazing. You might get invited to the audition for the indie film that changes your life. But unfortunately, that will never happen for 99% of you. Because you were too tired from work.

We all want something exciting in our lives. We want to wake up and feel alive again. So why aren’t you searching for it? Are you expecting fun to show up at your door and show you the world?

You say you want something meaningful in your life, you say you want to do things you’re passionate about, but how many hours a day do you spend looking for them?

Imagine if we spent just one week looking for our passion. Paint a picture on Monday. Yoga on Tuesday. Italian class on Wednesday. Tango on Thursday. Kickboxing on Friday. Drumming on Saturday. You can even take Sunday off. I guarantee you won’t even have time to read these blog posts after that. Will you find something you truly love? Maybe. Maybe not. But that’s not the point. The point is that you’re looking.

When you stay open to new experiences, you allow your life to change. You welcome new people and places in. You allow yourself to be inspired. And most importantly, you give yourself a chance to find your passion.

I never boxed until I was 25. Never published a blog post until I was 27. Never took a dance class until I was 28. Never surfed until I was 29. Before that, I always “wanted to sleep in” or was “too tired from work”. It took me a long time before I started saying yes, and I’m still not even sure I’ve found what I’m looking for. But the only regret I have is not starting the journey sooner.

There are so many interesting things out there. They’re waiting for you. 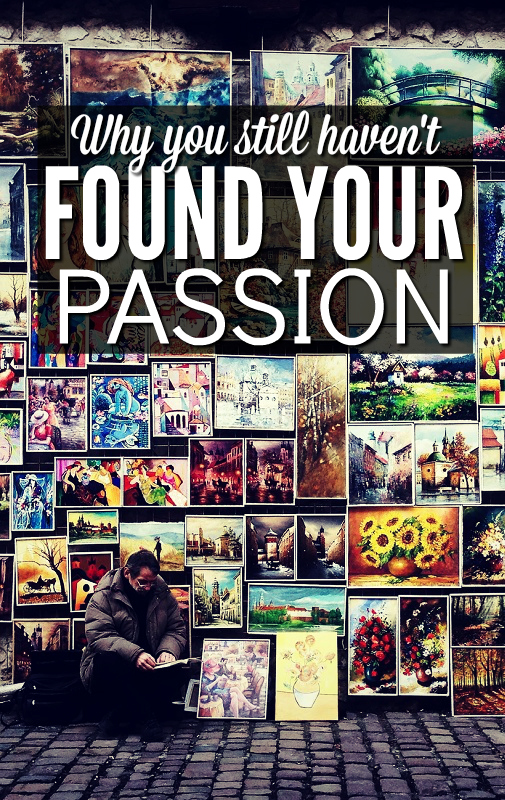