El Nido: The Most Enchanting Place You’ve Never Heard Of

This year while travelling around the Philippines I heard quite a few locals tell me about El Nido. Most of them hadn’t been there, but knew enough about it to tell me it was beautiful and that I should go.

I’d never heard of this place in my life. Couldn’t be that great then, right?

The archipelago of El Nido was like nothing I had ever seen before. The water was a bright, shimmering turquoise, the sands were white like flour and the towering limestone cliffs left me staring into the sky in wonder. Scattered throughout the islands were unspoiled lagoons and tiny hidden beaches, and under the water lay an endless world of incredible corals and rainbow coloured fish, still untouched after all these years. To put it simply, the place blew me away.

Read more: 10 Reason Why The Philippines Should Be Your First Stop In Asia

When people come back from Thailand I always hear them talk about Koh Samui and how it was the setting for Leo DiCaprio’s movie “The Beach”. However, while reading through the El Nido Wikipedia page I learned that the original story was actually inspired by El Nido, as the author was living in El Nido at the time that he wrote it. True story? The locals seem to think so. When you island hop across the archipelago you’ll be able to visit the ‘secret beach’ that is believed to have been the author’s inspiration.

How to get there

El Nido is not the easiest place to get to. It’s still relatively unknown which means it’s not particularly well set up to receive tourists; something you’ll find is quite common in the Philippines. I actually prefer it this way, because it means the hoards of tourists that can quickly destroy a place tend to pass on destinations like this.

First thing you’ll need to do is get to Puerto Princesa. It’s around an hour by plane from Manila and you should be able to get a decent price flight from Cebu Pacific, Air Asia or PAL (maybe around $40USD one way).

Once in Puerto Princesa you’ll need to get a van to El Nido. The drive is around 6 hours and you should be able to find an air conditioned van for around $15USD.

I stayed at the Garnet hotel, which was perfect. It has a great central location, right in the middle of El Nido town. Should run you about $40-$60USD depending on the season.

In any case you’re very likely to find something on Agoda that should be reasonable.

Island hopping is of course your first priority. This is what El Nido is famous for, and most likely why you’re going there in the first place!

The island hopping tours are standardised and you can choose from numerous different operators. Each one will offer 4 different tours, aptly named Tour A, B, C and D. I only had time for Tour A and Tour C, both of which I’d highly recommend. Anyway, here’s what you can expect.

The tours start around 8am and you’ll head out on a boat like this: 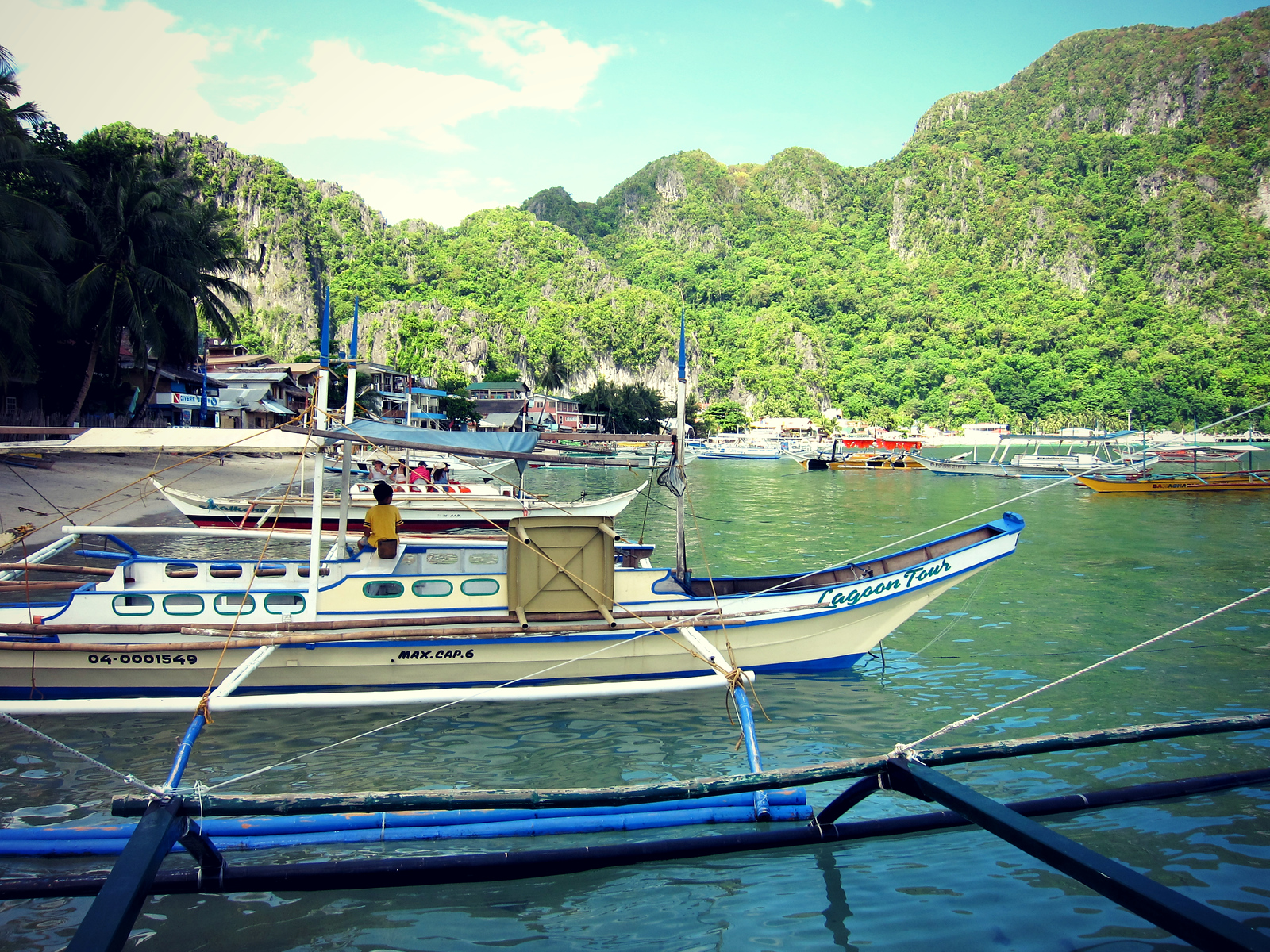 I’m not the biggest fan of boat rides but the ride out to the islands here is surprisingly pleasant. The ocean is calm, you’re surrounded by natural beauty and the morning sun is just warm enough to keep you happy. Kind of liberating, actually.

You’ll then spend the day visiting the various islands, beaches, lagoons, snorkelling and kayaking spots that El Nido has to offer.

The lagoons are my favourite. There’s something magical about swimming in these secluded pockets of water. As the guide tells it, they used to be massive limestone caves, and over the years the roofs eventually caved in leaving the lagoons that are here today.

The snorkelling around these islands is incredible, so make sure you rent a snorkel before your tour starts. Underwater life tends to freak me out a little bit, and I actually stepped on a sea urchin here which stung like ****. I ran to the beach crying and quickly returned with a long bamboo stick, hunting the culprit down to seek my revenge. Luckily for him I was unsuccessful.

I love the hidden beaches and lagoons tucked away in hard to find places. Obviously they’re not so ‘hidden’ anymore, but still breathtaking once you get inside.

During Tour C you will visit the Matinloc Island shrine. Having a peek inside the buildings that remain also leads you to believe someone was living there not too long ago…

At one point I actually found myself staring into the ocean for a good 5 minutes.

It didn’t even look real, but more like a neverending sea of blue Powerade.

Every tour also includes lunch. I was just expecting a bottle of water and a sandwich, maybe a mango too if I was lucky.

Instead, as soon as we dock for lunch the guide and the driver whip out a grill and serve up an insane feast. Grilled pork, crabs, squid, fish, salad, rice, watermelon, banana, pineapple, even a hot drink! Evidently I was so excited with all this that I forgot to take a photo.

Other things to do

So, what to do after the island hopping?

There are various shops throughout town where you can rent a motorbike. You can get them for around 500-700 pesos ($14-$18) a day. If that’s not your thing, a trike will be able to take you wherever you want to go.

There’s a few beaches and waterfalls around the place you can ride to, but if there’s one place I must recommend it’s Nacpan Beach. It’s around an hour away, but the drive is pleasant for the most part and the roads aren’t too bad.

Nacpan Beach is a little hard to find, so ask for clear directions before you leave and continue to stop and ask for directions along the way. Once you get there, it’ll all be worth it.

The beach is enormous, the sand is golden and the ocean is warm and crystal clear. But the best part about it is that it’s so secluded. We had the whole place to ourselves, and maybe saw two other people the whole time we were there. After driving through the long, winding maze of dirt roads to get there, pulling up to the beachfront definitely gave me the wow moment I had been waiting for. 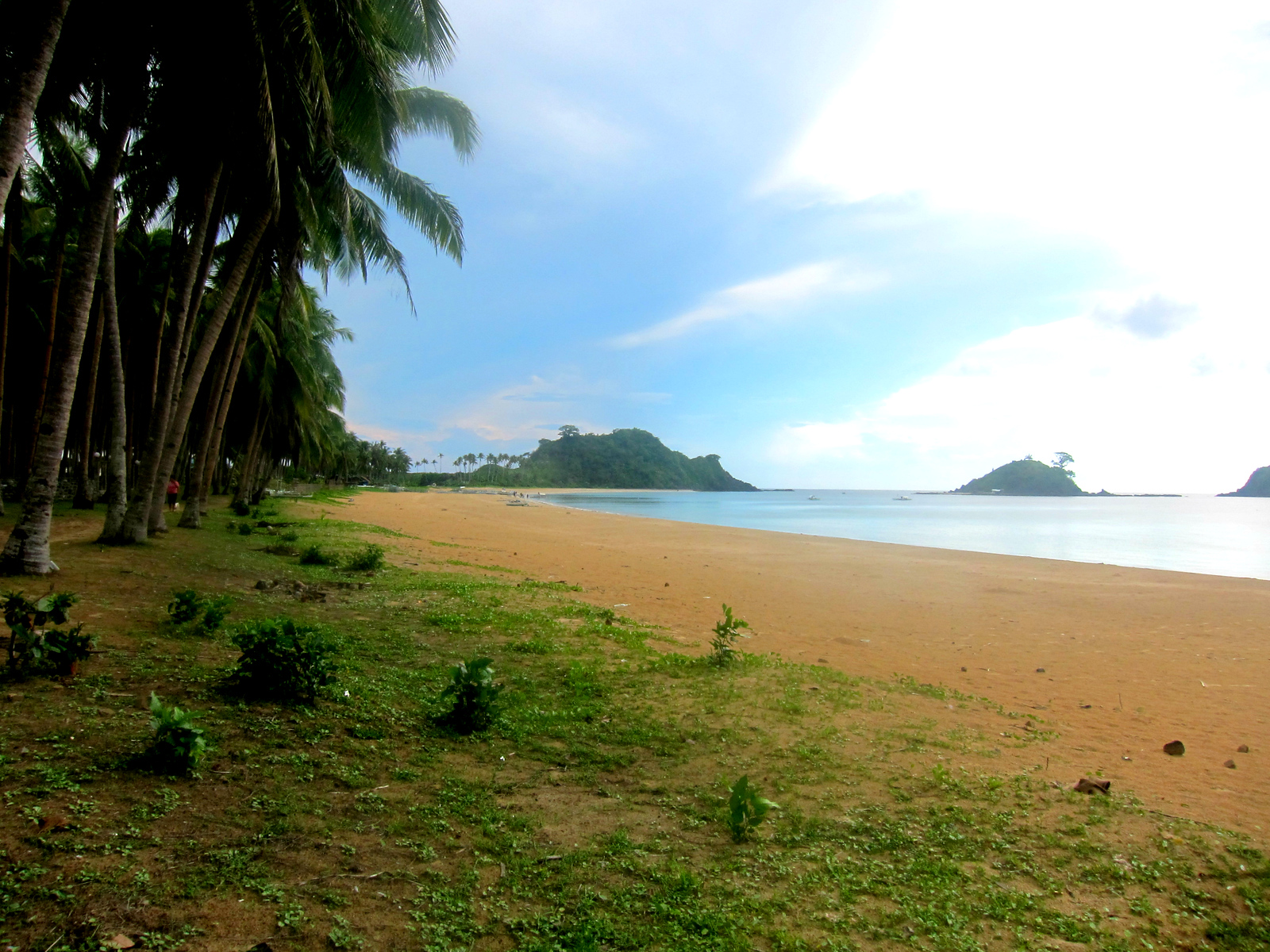 Tips for travellers to El Nido

From the looks of it El Nido is slowly getting more popular and as a result new hotels and restaurants are popping up around the town. In Manila I also see El Nido tours and even timeshares on sale throughout the malls. However as of now it’s still relatively unspoiled and there were only a handful of other tourists there during my stay. My advice? Get there asap! It’s one of those places you’ll never forget. 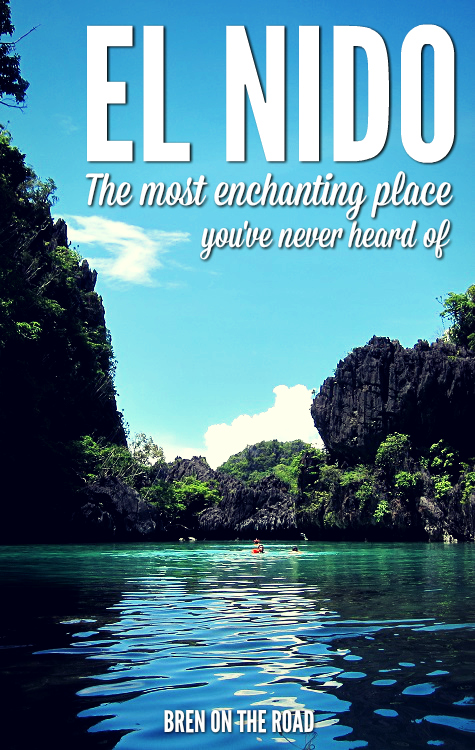 36 thoughts on “El Nido: The Most Enchanting Place You’ve Never Heard Of”