Dinner At A Maid Cafe In Tokyo, Japan

As we walked around Tokyo’s Akihabara district, wandering through video arcades, toy stores, and a rather popular six-storey sex shop, my friend turns and says to me, “Oh, and we should definitely have dinner at a maid cafe!”

Sure, whatever that is.

What followed was undoubtedly the most bizarre dining experience I think I’ll ever have in my life.

What is a maid cafe, you ask?

Maid cafes are apparently quite popular in Japan, and some might even consider them part of the country’s culture.

These are restaurants where you go to have a meal and the staff are all dressed up in over-the-top French maid outfits. They treat you as “the master” and they are “the mistress”, and, I guess, it is supposed to satisfy a fantasy of some sort (if any of you are thinking X-rated thoughts, sorry to disappoint but it’s nothing like that).

A comparison that comes to mind is Hooters – except the waitresses are, you know, Japanese maids, rather than Hooter’s girls.

As we stood out in the streets of Akihabara, I did a little “market research” and Googled the Top 10 maid cafes in Tokyo.

Scrolling through the lists, I was getting more weirded out by the minute.

“At this maid cafe, they have special theme days such as swimsuit day and schoolgirl day.”

Is this a cafe or a Las Vegas strip club?

“At this maid cafe, the maids will spoon feed you your meal for an extra 1,000 yen.”

Do I wear a diaper too?

“At this maid cafe, you have to play a funny game with the maid and if you lose, you get a slap across the face.”

Am I allowed to file assault charges afterwards?

“At this maid cafe, they can be kind and sweet or rude and bossy, or both – an icy-hot routine called “tsundere.” Sometimes they bully you for an hour and then cry when you leave.”

“At this maid cafe, they offer miniature food for men dining with dolls and pray for the souls of all their guests.”

Can we just go to KFC?

In the end, we decided on a kind of semi-normal looking place called maidreamin.

After heading upstairs, we were greeted by a girl who looked a little something like this: 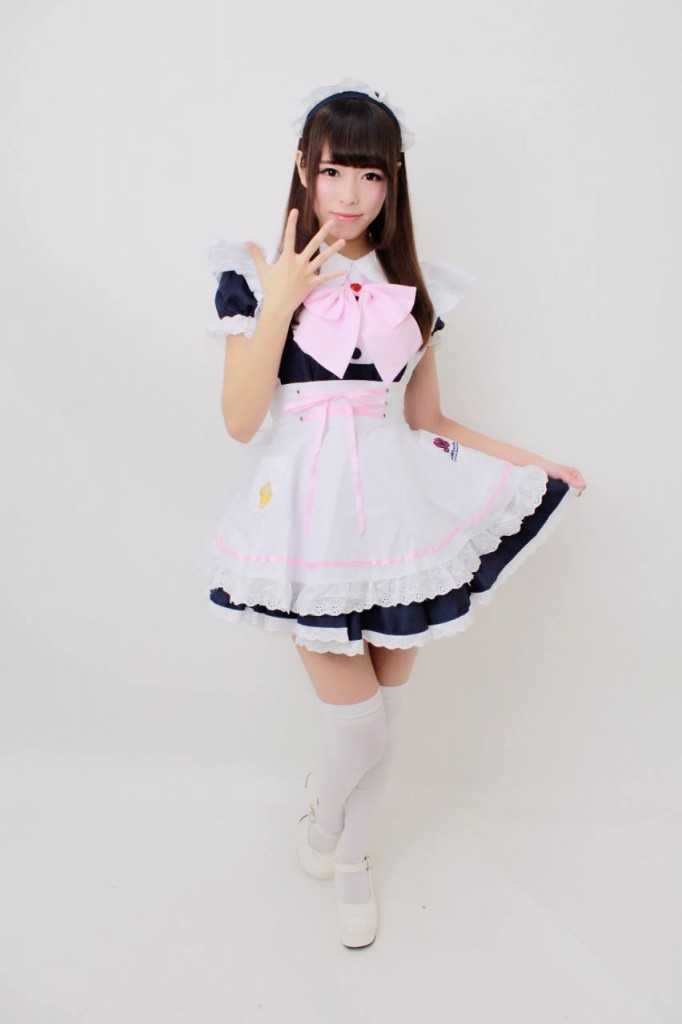 (sorry, I don’t have actual photos for you guys, no cameras were allowed!)

She informed us that there was an entrance fee of 1,000 yen as there was going to be a show later (I’ll get to that soon), and once we agreed she picked up some plastic light/candle Japanese toy thing and said..

She sang a little song (or said a prayer, or recited a poem, still not sure) tossed the candle toy around in her hands a bit and then smiled at us. We all looked at each other a little befuddled, laughed, and then got shown to our table.

What’s on the menu at a maid cafe?

There were four of us, so my friend and I opted for omelette rice and the other two got the steak.

As we waited for our meals, we all just kind of sat there observing. There were around 6 or 7 maids, not dressed in anything too outrageous, and not acting too weird either, just walking around serving food as a normal waitress would.

“Nothing too crazy about this place,” I thought to myself.

A moment later, our drinks arrived, served by a tiny (5’2 at the most) ghost-white Tokyo maid who was extremely soft spoken. She actually seemed pretty zoned out, and you could be forgiven for maybe suspecting she had pumped some serious “relaxants” into her arm before her shift.

Once our drinks were on the table, she sang a little song, and then started giving us some instructions. First, she told us, she was going to sing something and do a dance for a few seconds, and then afterwards we would all together need to say “moe moe kyun!” while bouncing our hands like rabbits over our drinks. Then we needed to clap and squeal like excited schoolgirls afterwards (I’ve since learned this is some kind of chant which is supposed to make your food taste better).

And so off she went, reciting her little poem, and then all together we said “moe moe kyun!“, did the rabbit thing, and clapped and cheered.

Now things were getting weird.

About 15 minutes later the food arrived. The maid brought our omelettes over, then knelt down beside us and asked what picture we would like her to draw for us. I asked for a pretty girl, and my friend asked for a dog.

With nothing but smiles, she then picked up a ketchup bottle and actually drew two pretty damn good pictures, without even hesitating. It was as if she’d gone to school for it or something.

What’s an omelette without a dog drawn in ketchup?

And then of course, we had to do the “moe moe kyun!” rabbit dance again, to help make the meal as delicious as possible.

Now that the food was served, I thought this might be as far as the weirdness went, but it turned out they were just getting started.

In fact, it wasn’t so much the maids that had me bewildered, but the customers themselves.

What happens after dinner at a maid cafe…

Beside us was a young couple, maybe 25 years old, and the guy’s smile simply did not leave his face the entire night. We soon found out it was his birthday. I couldn’t help but suspect he had been begging his girlfriend to let him come eat here for, I dunno, half a decade, and she’d finally granted him his wish on this special day. We’ll come back to this guy later, it gets better.

Then there was the couple of solo diners sitting around the cafe, who, judging by the quality of the food, didn’t come for the fine cuisine. I suppose there are worse ways to spend the evening than sitting around watching girls serve food in maid outfits.

And then, there was one group that had me laughing and terrified at the same time – a table of five fully grown men in business suits who took the moe moe kyun dance to a whole new level.

When their drinks arrived, they were all given bunny ears (like Playboy bunny style ears) and they looked happier than kids on Christmas. Then, instead of the little 3 second moe moe kyun dance that we did, they got the extended 45 second version, complete with dance moves and chants that they all did in unison. If I didn’t know better, I would think they’d all done a dress rehearsal the day before.

Of course, no one else blinked an eye. In Tokyo, five men wearing bunny ears doing a rabbit dance at dinner is seemingly quite normal.

And then “the show” started.

The lights went out and then the same maid that did our “opening ceremony” jumped up on a small stage in the middle of the room. She started shouting things out in Japanese getting the crowd riled up, and everyone seemed to be eating it up. Of course, I just sat the smiling nervously, for all I know she could’ve been saying “Look at these foreigners sitting down here, let’s get them on stage for some belly dancing.”

Once the crowd was all buttered up she broke out into a little song and dance, complete with mini laser light show and everything.

And then, she turned to the table next to us, pointed to the birthday boy, and ushered him on-stage.

“Oh shit..” I laughed to myself, and watched him relucantly get out of his seat with a painfully nervous smile plastered across his face.

I watched him walk over to the stage, wondering what they were going to make him do. Probably some super remix of the moe moe kyun, I guessed. We were all waiting for maximum cringe.

But, it seemed his nervous smile was just a disguise. He wasn’t nervous, he’d been waiting for this moment all night.

“Ichi, Ni, San!” the maid shouted, and then, right before our eyes, the two of them broke out into a fully choreographed maid dance, the guy busting out moves with a huge smile on his face.

I looked at my friends, laughed, and then turned back to him, watching him and the maid waving their arms around in perfect unison, both having the time of their lives.

I didn’t get it. How did he know the dance? Was it something famous, like the macarena? Is it something you see on TV? Or did he just really like maid cafes?

Judging by the look on his face, it looked as if this was his moment of glory, as if he’d been training and practicing and preparing for this moment for years, and now he was finally getting his time in the spotlight.

The dance went on for about 5 minutes, and, like a pro, he didn’t miss a single step.

Finally it ended, the room clapped, and he promptly returned to his table and ate his birthday cake, as if it was a completely normal evening.

At this point, I’d had about all the maid cafe I could handle, so we downed our drinks, paid our bill, and high tailed it out of there.

And, despite a no photo policy, we were actually allowed one photo with a maid of our choice before we left:

How much is a Maid Cafe in Tokyo?

They seem to be scattered around Tokyo, but are mostly centered in the Akihabara area. We paid around $40 a head for a meal with a drink, a souvenir, and of course, the show. This is a pretty standard price for a maid cafe in Akihabara, Tokyo.

Is it worth it?

I don’t think I’ll ever go again, but it definitely seems like one of those things you might want to do at least once in your life. Maybe I’m just ignorant, but I can’t say I really “get it” yet, however, I will admit that I did find the evening quite entertaining, and that’s all that matters, right?

If you’re ever in Tokyo, pop in to a maid cafe for dinner. It’ll definitely make for an interesting night!

Heading to Tokyo? A few tips: