I’d just had dinner with some friends in the main square and they’d all clocked out early; it was only 11pm. With a belly full of beer, I decided to hit the bars for a couple more, lone cowboy style.

After a twenty minute walk I was in the bar-heavy Kazimierz district, one of Kraków’s tourist favourites. I headed straight for Pies Piekny, one of my regular spots. They always had good tunes playing in there.

My first mission was to visit the toilet.

Someone was in there, so I leaned against the wall and waited. An old dude, maybe sixty, walked past me.

“Do you know where the toilet is?”

I pointed at the door in front of me. I guess if you were a first-timer, you’d walk right past it. It was unmarked, in a weird spot. He looked it over quickly, then came and waited beside me. He was shortish and stocky, and dressed casually, in a tee and sneakers, looking like a typical bar dweller.

“Where are you from?” he asked.

His name was Finn, from Scotland. We got chatting, while whoever was in the toilet was doing drugs or taking a shit, or something else that took a lot longer than what a normal human being should take in the bathroom. After a minute of small talk, the toilet hogger finally emerged.

I did my business and headed to the bar. A lady sat there alone, maybe mid thirties, blonde, sipping on something girly.

“Is someone sitting here?”

She smiled and shook her head.

Her name was Monica, from Poland.

“What brings you to drink alone at a bar on a Tuesday?”

“It’s my day off tomorrow.”

As I ordered my first drink, Finn emerged from the bathroom and sat on the other side of her. I gave him a nod, and continued my conversation.

We’d been talking maybe fifteen minutes when Finn decided to interject. I forget what we were talking about exactly. He offered to buy a round of drinks. I wasn’t going to say no.

“Gin and tonic for me brother.”

The three of us sat there talking for the next two hours. I told Finn more about myself, my travels, my blog, which he wrote down on his phone. He was a journalist himself, so despite our age difference, we had parallels to talk about. I offered to buy the next round.

The night drifted on to about 2 a.m, and many rounds later we’d somehow ended up on the dance floor. It was empty, so the three of us just bopped around like idiots. I showed off my salsa moves to some rock music with Monica, while Finn continued pounding drinks. But soon enough it was time to go.

We exited the bar. Monica started talking to some guys standing outside the bar next door, while Finn stood by, enjoying the night air.

I crossed the road to sit on a flight of steps while trying to call an Uber on my phone. As always, none were available. I put my phone away and slouched against the wall for a moment, waiting to try again in a few minutes. From there, I had a front row seat to the events that would follow.

Monica enters the bar with the guys. I cannot tell if she knows them or has just met them. But she sits at a table inside and happily accepts a drink. Finn is standing outside, playing with his phone. I check for another Uber.

Then some guy in an orange sweatshirt appears. He approaches Finn and starts grabbing half-heartedly at his pockets. I watch from a distance. He seems harmless enough, no different to the regular drunk encountered outside bars in early morning hours. But a lot of things are being said between them. I keep an eye on things.

Then a flurry. The orange sweatshirter grabs more fiercely this time. Finn pushes him and walks away, towards me. Orange Sweatshirt Guy follows and grabs at him again. Finn throws a short backhand and connects on his chin.

“Get lost!” he says sternly, pointing a finger in his face. The guy stares back at him, shouting something in Polish.

Finn comes up to me, slightly flustered.

We shake hands and he hurries on his way, shuffling off down the street.

Orange Sweatshirt turns and says something to me in Polish. I shrug my shoulders, shake my head and tap my ear as if to say “I don’t understand”, and go back to checking my phone.

Then some shouting from the bar. I look up and a can of pepper spray is mid flight. Orange Sweatshirt catches it and runs towards Finn.

Adrenaline pumps. My heart starts to beat loud. Boom, boom. My eyes flicker left and right. I see everything in front of me. Four guys standing at the door of the bar, watching. I presume they’re his gang buddies. They look calm, like they’ve seen this a hundred times. Orange Sweatshirt is about twenty steps from Finn. Finn is still oblivious. No one else is around, save for a couple of parked taxis.

I stand up and shout something. I don’t remember what. Probably just something like “Hey hey hey!!!”

Finally Finn hears the footsteps and turns around. He takes a spray to the face. He stumbles forward. Orange Sweatshirt talks some shit, taunting. He sprays again.

I look at the door of the bar. Still four guys watching, calmly, drinks in hand. I look at Finn. He takes a punch to the side of the head.

I have to protect him. This is what all those hours in the gym are for, right? To end fights. To protect ourselves and our friends.

No. Don’t kid yourself. You’re a rookie. Find the cops.

He takes a kick to the face. I recognise the technique. Kickboxer.

I grimace. Five versus one. There is no way this ends well for me.

Finn takes another kick, to the shins. He welps in pain.

I run over, hands up. He sees me and turns, and sprays at my face. I slip it and feel it hit my neck and the back of my head. The smell is suffocating. I back up. He follows me. He sprays at me again but it doesn’t reach, although my breath catches some of it. It’s strong. I look the guy in the eyes. He’s drunk. I want to engage. I can engage. I glance at the bar. No, I can’t. There’s too many. He breaks into a sprint right for me, the can of mace out in front of him. I do a little shuffle, and sidestep him easily. He stares at me, surprised.

I walk backwards, down the street. He’s following me, slowly, arm outstretched. I’m surprised too, that I am not afraid. My head is clear. I hold eye contact, shaking my head at him. He continues to follow. This is good. I hope Finn has picked himself up by now, and run his ass out of there.

After half a block, Orange Sweatshirt finally turns around and runs back. I watch him, wait for him to turn the corner and then follow.

I get back to the same intersection where Finn had been smacked around. I peek around the corner. I can see the bar. They’re all sitting inside. I look around. Finn is nowhere.

I spend the next hour walking around Kazimierz trying to find him. Secretly I also want to find Orange Sweatshirt by himself somewhere. I’m angry. But I find neither. I sit in the main square for a while. My neck is burning and hurts to touch. I try to think. I don’t have his phone number, his Facebook, his hotel, nothing. I just know his name – Finn, from Scotland.

The sun starts to come up. I go home.

The next morning I wake up at lunchtime. I have an email. It’s Finn.

At first I think, how? And then I remember. He wrote down my blog on his phone.

“Brendan, are you okay? I have been quite badly injured. The guy sprayed me and attacked me while I was defenseless. I could not see or hear anything. Nobody would help, not the taxi drivers or the police and not even the bar where we’d spent the last four hours. Please let me know how you are.”

“Finn, I was there, I saw the whole thing. I’m fine. The boys in the bar were his mates. They threw him the mace and he chased after you. I’m sorry I couldn’t protect you. They were just too many. What happened to you after? I looked for you everywhere.”

We exchanged emails for the next half hour as I relayed the whole story to him. He’d been picked up by some family and had already left town, readying himself to return to Scotland. With him he’d take some cracked teeth, a broken jaw, bruising on his legs. But he was still breathing. He was going to be okay.

I spent the rest of the day lying on the couch, feeling shitty, shadow boxing in front of the mirror, trying to convince myself I did the right thing. I ran over all the ‘what ifs’ in my head. Some of them ended with Finn and I standing over five groaning bodies. And many more ended with us both breathing out of tubes in the hospital. But it doesn’t pay to torture ourselves with such games.

The moral we’re left with is, as beautiful as it is in Kraków – and the world – you have to be careful out there. Big trouble is always somewhere. 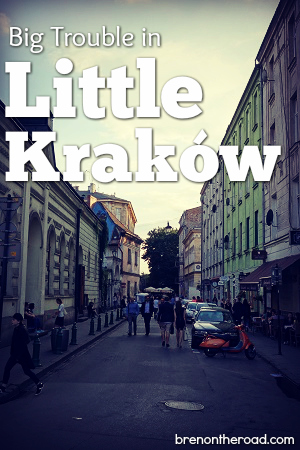