What Happens In The Amsterdam Red Light District?

It’s still early, and I’ve been wandering these Amsterdam streets for a couple of hours now. Before I head home, there’s one more thing left to do. Something that everyone does here in Amsterdam.

It’s probably the most famous red light district in the world, rivalled only by Thailand’s Soi Cowboy or Patpong. We’ve all seen photos of it, we’ve all heard about it, but of course nothing is going to compare with seeing it with your own eyes.

Funnily enough, I can’t even find this notorious place on Google maps. Searching “red light district” sends me to all kinds of strange parts of the city. It’s only after getting on the McDonald’s wifi and asking Google that I realise it’s known by it’s Dutch name – De Wallen.

Finally, after maybe half an hour, I think I see it – some pink/red lights in the distance. As I get closer I can tell it’s what I’ve been looking for – the infamous Amsterdam windows. Interestingly, these few windows are right next to a huge old church in the centre of the city, known as the Oude Kerk, or the Old Church.

Not knowing what to expect (or I suppose, knowing exactly what to expect but still not expecting it), it’s a minor shock when I walk past the first one. A skimpy girl in lingerie stares back at me. She winks and gives me a “come hither” motion with her index finger.

This continues, as I walk past maybe seven or eight windows, and am propositioned in sign language by seven or eight half naked women. When I reach the end, I take a moment to shake it off.

It was odd, exciting, sad, peculiar, enjoyable, all at once.

In the distance, I see even more pink lights, leading into a bunch of small alleyways and side streets. I walk briskly. I can’t wait to see what’s inside.

In this next maze of streets, there must be at least 100 windows. It’s filled with women in bikinis, lingerie, skimpy dresses. Many of them look slavic, maybe Russian or Ukrainian, Polish, at a guess. Many of them are very pretty, like supermodels. Some are simply gorgeous. 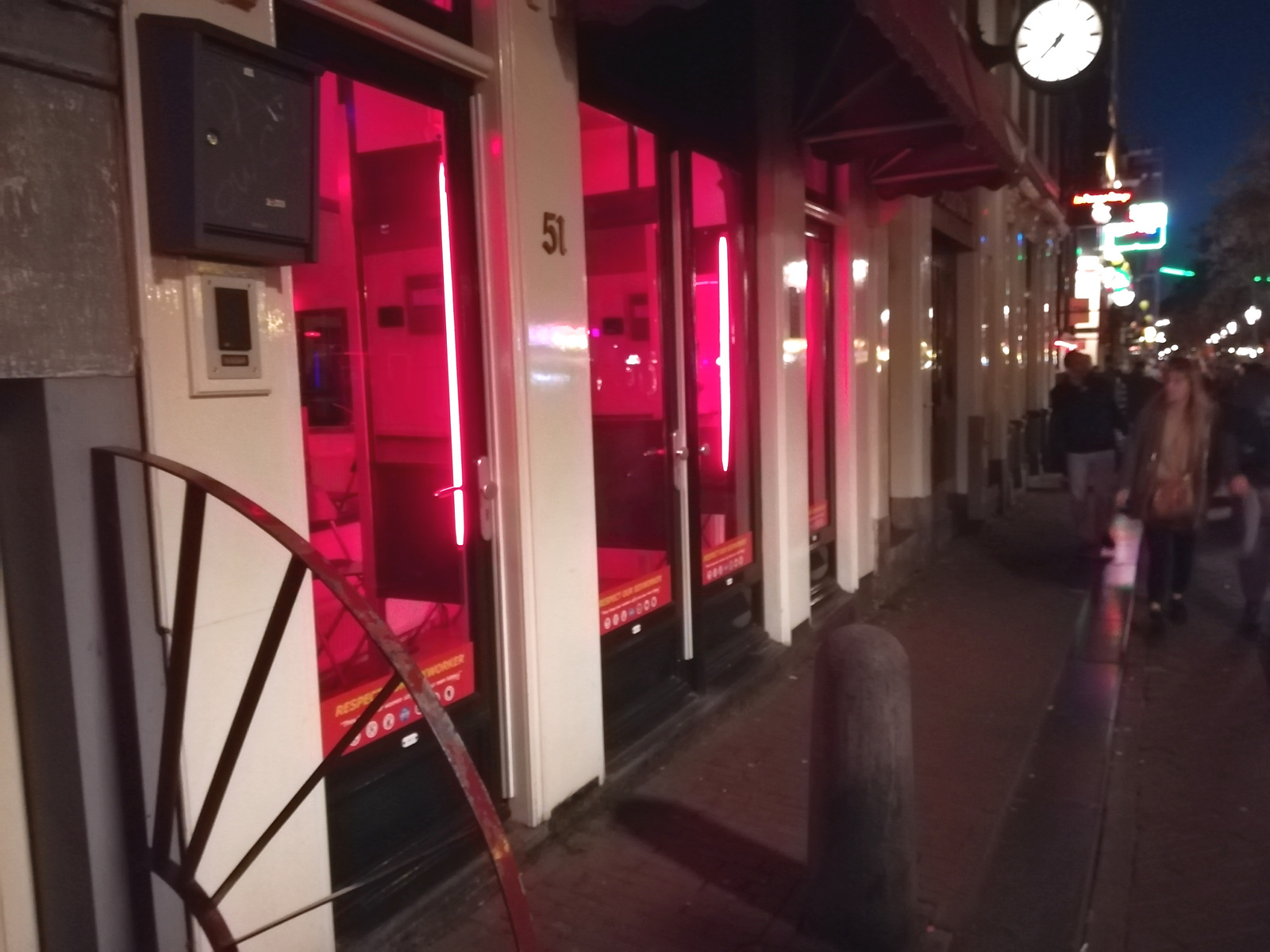 These few windows were empty, but you’ll normally find sex workers posing behind them.

But perhaps even more interesting than the women, is the crowd. There are no Dutch people here. It’s all tourists. This is a tourist attraction. Groups of friends and couples walk around, pointing at the girls, staring, laughing, I can overhear drunk teenagers egging each other to “go for it”. Old men stroll the streets like they’re in a shopping mall. Just like me. Strolling these streets like I’m in a shopping mall.

After walking down four or five streets, my mind is overloaded. I’ve never seen so many pretty women in their underwear in the flesh in such a short time – literally a buffet of female bodies. One of them is so aesthetically perfect she looks like she’s been photoshopped. As you walk by, most of them look at you with inviting eyes, trying to seduce your euros. Some just stand there like mannequins. Others just sit in their underwear, scrolling through their phones.

Still, I’m not exactly sure how this thing works. Is there a room in the back? Surely there can’t be rooms behind every one of these windows? Maybe you’re supposed to take these girls to your hotel? Behind the girls all you can see is a table, a chair, maybe a coat hanging on the wall.

But then a few windows along I see an actual bed in the window. It’s small. And then I think, guys are actually supposed to walk right in there and walk right out? In front of all these people?

Surely nobody is going to do that.

But, right on cue, somebody does it. A young guy, maybe in his twenties, walks into a door. The girl closes the curtains behind him, but not before he gets a split second glance outside to see myself and maybe thirty other people staring at him.

Does he think we’re judging him?

I’m not judging you, player. Have fun.

Eventually I come to what seems like the main street of De Wallen. There are strip/sex clubs everywhere and bright lights lining both sides of a canal. The first thing I walk past is the notorious peep show. It’s a circle of booths that surround a small room, and you pay 2 euros for a 2 minute peep of what’s happening inside.

Probably one of the weirdest things I’ve seen people actually pay for.

Of course, I go ahead and pay for it. 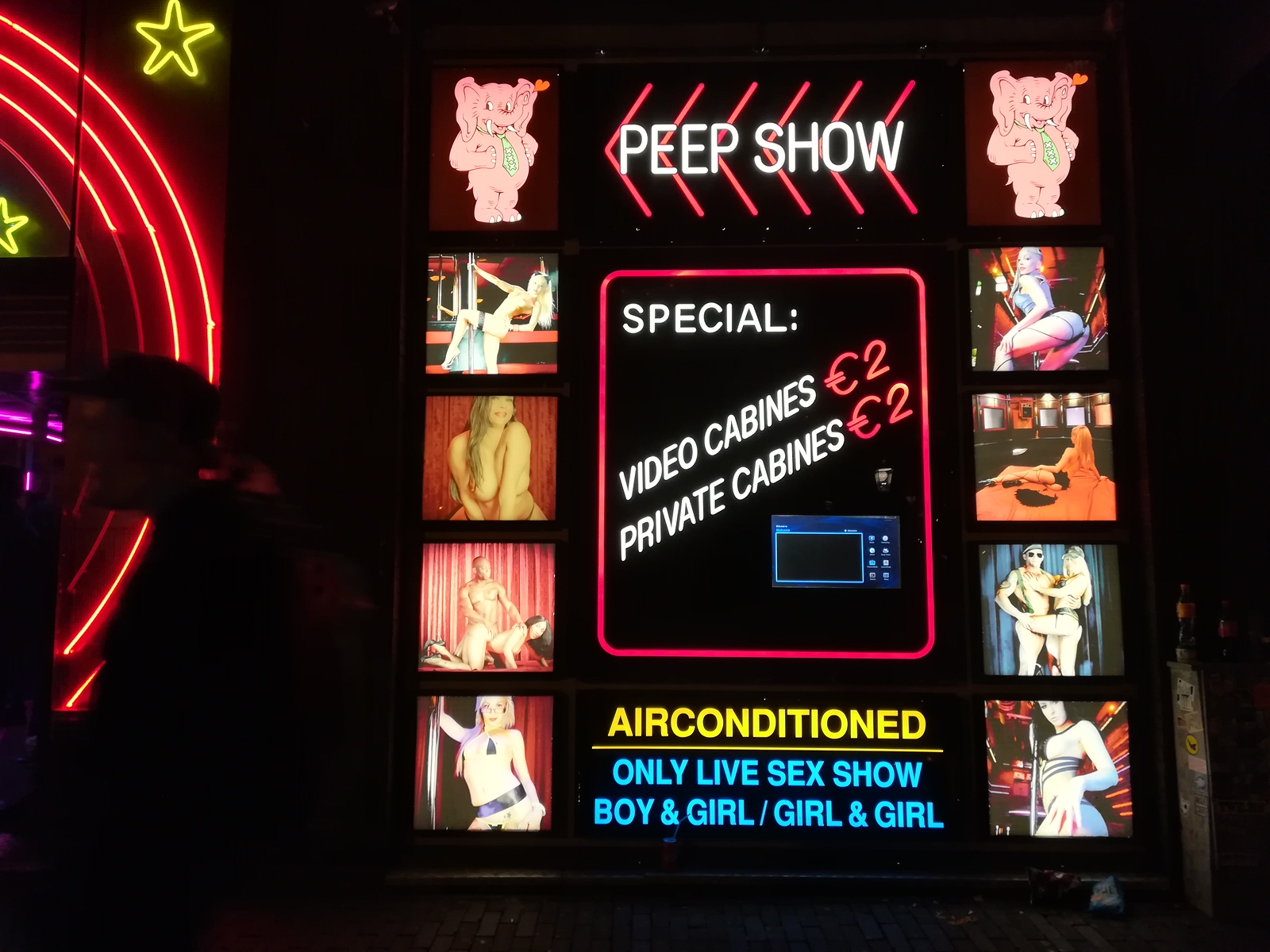 The booth is tiny, the size of an airline toilet. Not an Emirates one, a Ryanair one. I drop my two euros in the slot, like a video game. The shutter opens and inside there’s a small stage with a circular bed, like in Austin Powers. On it, there’s a guy performing oral sex on a woman. Neither of them are supermodels, and neither of them look like they’re particularly enjoying it. Around the bed you can actually see the other “peepers” in the windows of the other booths, all staring at this couple, like we’re in a zoo. Everyone looks like how I suppose I look – kind of amused, kind of confused. Except for one old Japanese looking guy whose eyes are really popping out of his head.

Then the shutter drops. Time’s up.

As I exit the booth, a crowd of tourists lingers outside, intrigued as I was, reading the signs and trying to figure out how it works. This place is really going to get two euros out of every one of us.

I continue my walk around the street. The live sex show sounds interesting, and is infamous in Amsterdam, but it’s 35 euros. I tell myself I’ll think about it (I did actually go back later ready to pay, but it was about to close). 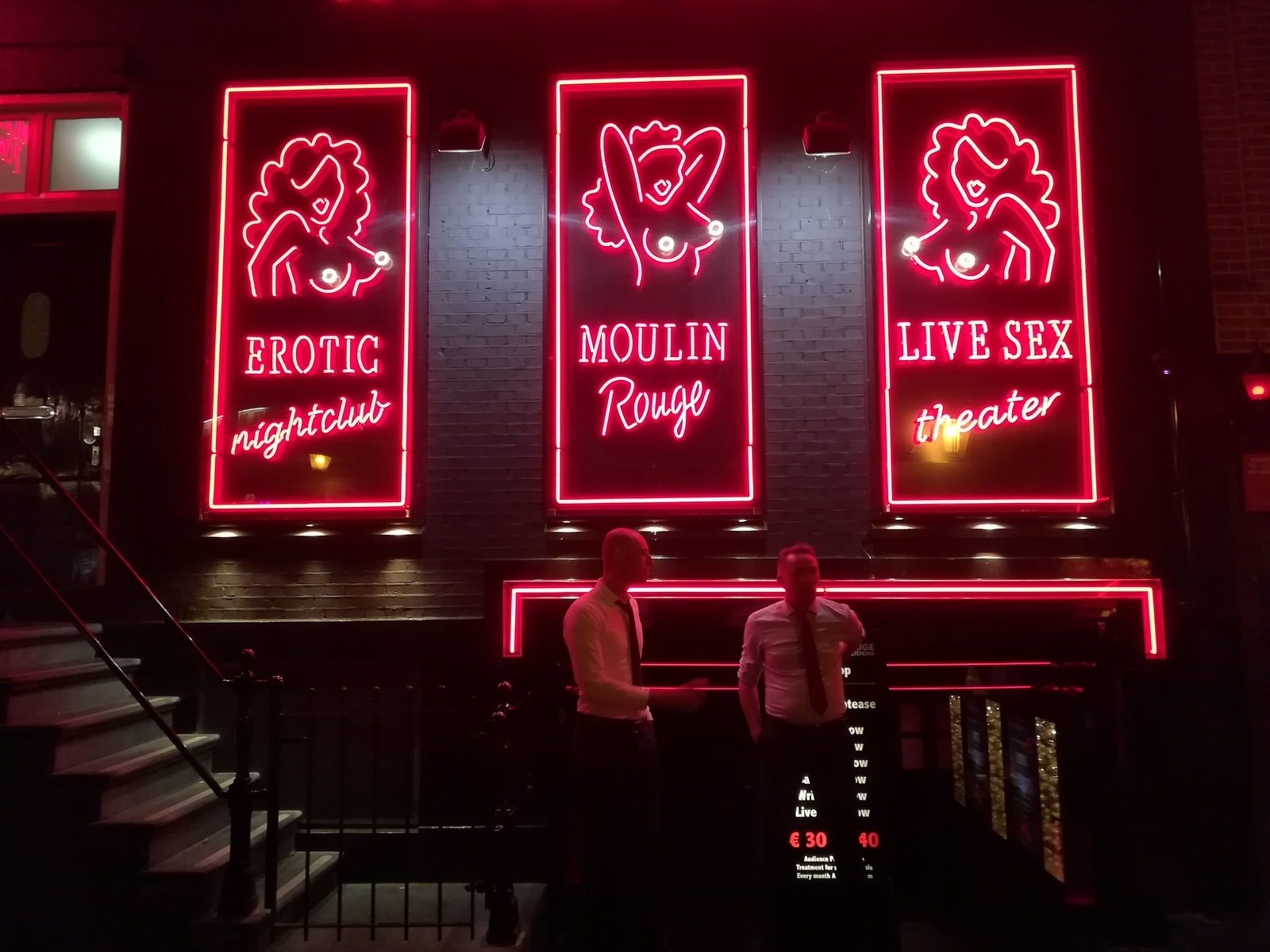 And of course in between all these weird places, more windows. More attractive half-naked women. More tourists staring at them, husbands and wives, likely thinking very different things. I walk past one who looks just like Jessica Alba. She sees me looking at her, and turns around and shows me her bum.

She’s got the type of body that makes men weep.

Why isn’t this girl a bikini model somewhere?

How did she end up behind that window?

After circling more windows through the maze of streets, like a kid in a candy store, I find myself back at the canal. Beside me is the Red Light Secrets Museum. Posted up by the door, they’ve got the TripAdvisor reviews from seemingly satisfied customers. It actually sounds interesting.

11 euros to get inside. Cheaper than a sex show.

The museum turns out to be better than I thought. They show you mock ups of the rooms behind the windows, tell you about the landlords who rent them, the prostitution laws, the lives of the girls. Many of them actually make a good living, and work for around 3-5 years before taking that money and doing something else.

There’s also lots of interesting facts and tidbits; the standard rate the girls charge is 50 euros for 15 minutes, the average booking takes 6 minutes, and the most requested service is non-sexual.

They also tell you about the history of the district, the problems they’ve had with trafficking, and other less glamorous parts of the business.

Finally, they also let you stand inside a window, so you can see what it feels like from the inside.

Right at the exit, there’s a confessions wall where visitors can anonymously write their darkest secrets and drop them in a box, and the museum posts the good ones for everyone to see. Most of them are like “I’m cheating on my husband with Bob” but there are some wild ones up there too.

It’s almost midnight when I get out. As I walk through the maze of streets one last time, the girls seemed to have gotten more aggressive in their selling. Many of them tap the windows as I and other guys walk past. After I make eye contact with a petite young blonde, she actually opens the door and loud whispers at me.

“Just to talk, quickly,” she nods, with innocent eyes.

I walk up to her window and say hello. The first thing I notice is the makeup caked heavily on her face.

“Do you speak English?”

“Do you want to come inside?”

Of course part of my brain is saying yes, but the answer that comes out is no.

Her smile turns into a frown very quickly and she closes the door in my face.

How rude, I think to myself.

It’s late now. As I start heading back towards the bus stop to go home, I walk over one of the canal bridges and overhear a bunch of American teenagers hyping up one of their friends. I linger a little to see what the deal is.

Eventually he pats the air and says “okay okay okay”. He takes a deep breath, then walks right up to the window of a very pleasant looking lady.

From a distance I hear her ask “How old are you?”, he answers “Nineteen”.

She lets him in and pulls the curtain. His group of friends jump up and down like a bunch of 11 year old girls who have just sold three crates of Girl Guide’s cookies.

Another American girl walks past, after seeing the whole thing, and asks if he was a virgin. They all say yes with big grins. She high fives them, they all have a laugh together.

Just as I’m exiting the district, the final alley, another girl opens her door and waves me over.

“Please, come inside, come inside” she whispers, hurrying me over with her hands, as if there’s a thunderstorm coming.

I walk over to talk to her. To be honest, I really just want to sit and interview her. Ask her some terrible questions. What a great blog post it would make afterwards.

I smile at her.

The funny thing is, I actually don’t have 50 euros.

“Another time,” I tell her.

This one doesn’t slam the door in my face, she actually smiles and says okay.

How nice, I think to myself. I say goodbye and walk on.

Twenty minutes later, I’m sitting at the bus stop, freezing. Over an hour to wait.

I guess yeah, it is kind of strange.

And then I remind myself, it’s freakin Amsterdam, man. Strange is what we came here for.

One thought on “What Happens In The Amsterdam Red Light District?”